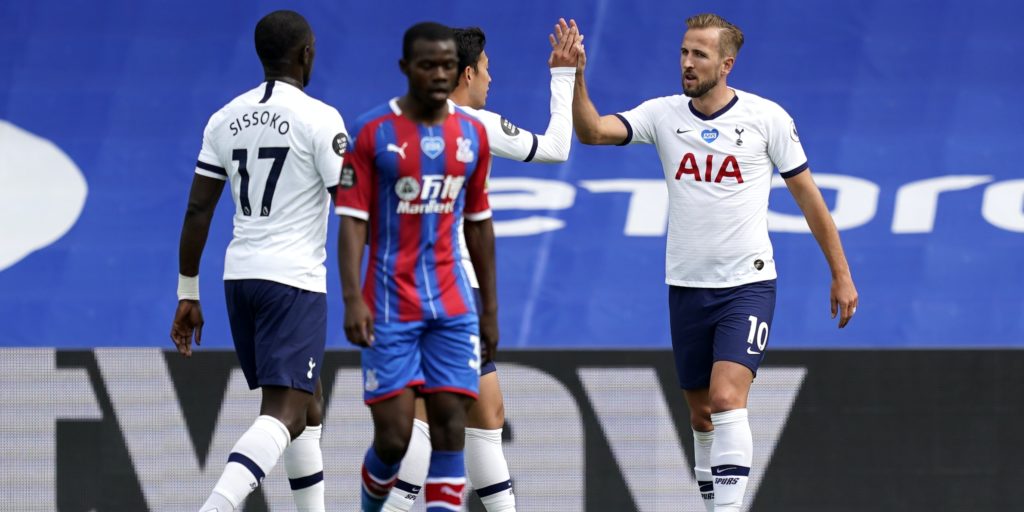 Tottenham booked their place in next season’s Europa League after a 1-1 draw at Crystal Palace.

Spurs had to better Wolves’ result at Chelsea to guarantee a top-six finish and they did the job as Harry Kane’s 14th goal in 19 games under Jose Mourinho helped earn the decisive point.

It was far from convincing, though, as Palace levelled through Jeffrey Schlupp and were the better team in the second half at Selhurst Park as they ended a seven-game losing streak.

Nonetheless, to secure their place in Europe has to be heralded as as impressive achievement as they were seven points off sixth after defeat to Sheffield United earlier this month, but a six-game unbeaten streak has got them there, even if it is on goal difference.

For Roy Hodgson, the manner of their display will give him reason to be optimistic after a horrible few weeks of the return.

It looked like it would be an easier afternoon for the visitors than it turned out to be.

So, there was little surprise when they went ahead in the 13th minute and even less surprise at who scored it.

Kane has been in a rich vein of form since the restart and scored his seventh goal in eight games with a fine finish.

Lo Celso did the hard work by silkily beating his man to feed Kane and there was little doubt about the end result as the England captain cut inside and fired into the bottom corner.

That gave Mourinho’s men what they needed and they were happy to allow Palace possession and look to hit them on the counter-attack.

Another lightning break saw Harry Winks’ cross just evade Kane while Moura’s surge into the box saw him round goalkeeper Guaita but could not pick out a man.

Spurs were punished for failing to assert themselves and Palace levelled eight minutes after the restart.

Mourinho’s men were rattled and were on the back foot as Palace smelled blood.

They almost got lucky with one as a cross from the right bamboozled Hugo Lloris and hit the near post while Ayew fizzed an effort wide after Moussa Sissoko lost control in a dangerous area.

Spurs were living dangerously, failing to have a shot on target in the second half, and almost lost it in added time.

Palace forced a late free-kick and an inviting delivery was met by Dann, but his free header was placed wide.

The visitors nervously held on to ensure European qualification, with Mourinho and his staff celebrating at the end.