Home On This Day On This Day: Lallana’s late winner in Norfolk humdinger

On This Day: Lallana’s late winner in Norfolk humdinger 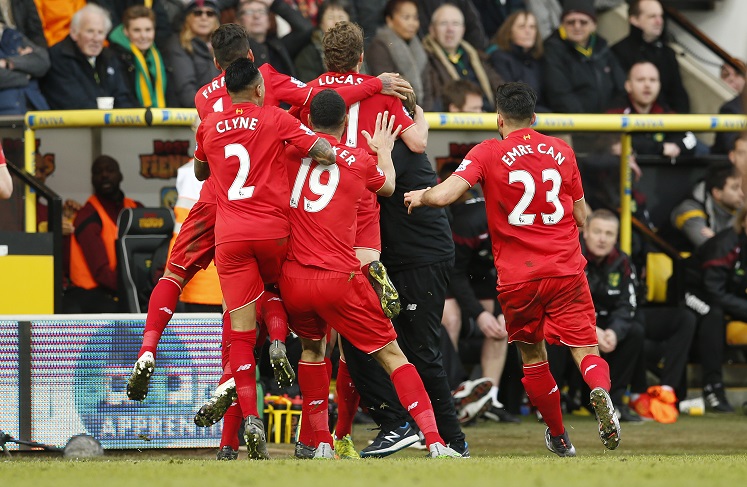 Carrow Road was the venue for a nine-goal thriller back in 2016 as Liverpool's Adam Lallana scored a last-gasp winner in an amazing 5-4 win over Norwich City.

Norwich were on a three-game losing run in all competitions heading into the contest on January 23, 2016 while Liverpool, who only had Jurgen Klopp in charge since October 8 after he replaced Brendan Rodgers, had failed to win their last three Premier League matches.

What transpired at Carrow Road was an absolute thriller as both teams put on a goal-fest in front of 27,108 spectators, providing thrills and spills from the off in Norfolk.

Brazil international Roberto Firmino opened the scoring for the Reds in the 18th minute after managing to slide hit shot past Declan Rudd, before Dieumerci Mbokani produced a sublime back-heel nine minutes later to level the scores.

Norwich then appeared to take control of the game with a debut strike from Steven Naismith four minutes before the break followed by a penalty from Wes Hoolahan in the 54th minute, putting the hosts 3-1 ahead.

However, England international Jordan Henderson pulled one back just a minute later before Firmino grabbed his second in the 63rd minute after the Canaries’ defence had decided to go walkabout.

James Milner put the visitors back ahead in the 75th minute after he picked up on a loose back-pass before racing through on goal, rounding the keeper and slotting into an empty net.

There was more to come from Norwich when defender Sebastien Bassong pinged in a left-footed strike from the edge of the area in stoppage-time, sending the home supporters into raptures.

However, just when City thought they had claimed a share of the spoils, and with centre-back Steven Caulker flung on up front, Liverpool midfielder Lallana found the back of the net with seconds remaining, sparking mass celebrations on the sidelines with Klopp losing his glasses amidst the fun.

It felt like a fitting way to end what was a thoroughly entertaining encounter, which has gone down in Premier League history.

Liverpool would end up finishing that season in eighth, just missing out on a Europa League position, while Norwich ended up 19th and were relegated to the Championship.