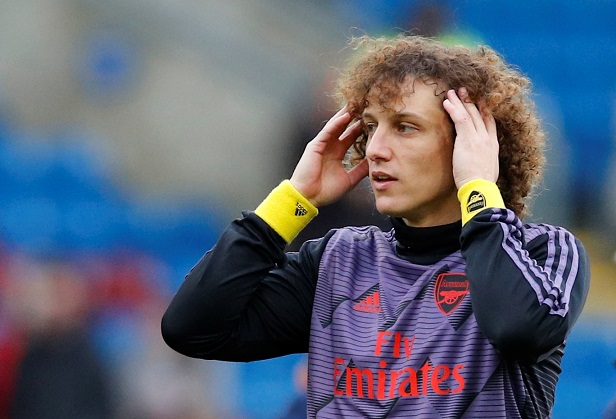 Arsenal defender David Luiz says he does not mind shifting across the Gunners’ backline to accommodate new signing Pablo Mari.

The 26-year-old joined Mikel Arteta’s side on loan from Brazilian outfit Flamengo at the back end of the January window.

Mari arrived as a left-footed centre-back with the new Gunners boss keen to see more balance in his central defensive options.

Luiz, Sokratis, and Rob Holding are all right-footed with the former tending to be the one to play on the left side of defence.

Their traditional defensive woes have continued this season, with Arsenal lying tenth in the Premier League after conceding 34 goals in 25 games.

Mari’s debut could possibly come on Sunday when the north London side welcome Newcastle United to the Emirates Stadium following the conclusion of their winter break.

That would mean potentially moving Luiz across to the right side of the back four, despite largely playing on the left during his career.

However, the 32-year-old says he would not mind moving across and says he is happy to play wherever asked.

“It’s good when you have a squad with a lot of quality players. We have a game every week, you have to be happy with this.”

Mari played 22 times for Flamengo in the 2019 Brazilian Serie A season, scoring twice.

He was at Manchester City for three years between 2016 and 2019 but never played a senior game.

Instead, he had loan periods in Spain with Girona and Deportivo La Coruna either side of a spell in Holland at NAC Breda.

He was part of the Flamengo side which won the 2019 Copa Libertadores following a late comeback win against Argentine outfit River Plate and Arsenal have the option to make the move permanent at the end of the season should he impress.