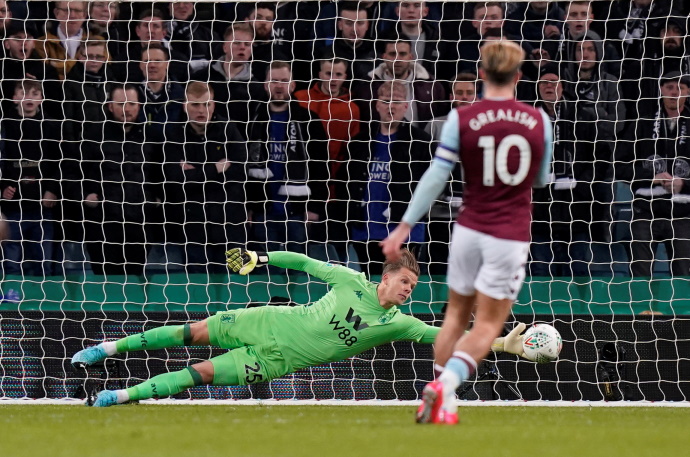 Proud Aston Villa boss Dean Smith says the club owe a huge debt of gratitude to goalkeeper Orjan Nyland as they booked their place in the Carabao Cup final.

Smith spoke of his pride after leading his boyhood club to the League Cup final with a dramatic late victory against Leicester, but it would not have got that far had it not been for the heroics of the Norwegian shot-stopper.

Nyland produced three outstanding first-half saves and Smith admits the Scandinavian has given him a selection dilemma ahead of the final on March 1.

Pepe Reina has been outstanding since he was brought to the club, but Nyland has played himself into contention with his performance against the Foxes.

“We are indebted to Orjan, who made three great saves. He was really top drawer,” said Smith. “But I’ll tell you who will play when we get round to Wembley, there’s a few games before then.

“He’s certainly given me a conundrum but it’s the type of decision I want, if I’m honest.”

Smith, a Villa fan, also hailed a “goal made in Egypt” after substitutes Trezeguet and Ahmed Elmohamady combined in added time to give the hosts a 2-1 win, and a 3-2 aggregate success.

The game looked to be heading for a penalty shoot-out after Kelechi Iheanacho’s second-half strike had cancelled out Matt Targett’s 12th-minute opener for Villa.

However, Trezeguet popped up at the far post to guide home Elmohamady’s deep cross on the volley and send Villa to a first final in the competition since losing to Manchester United in 2010.

“I’ve composed myself now, I certainly let myself go when we scored that goal,” added Smith. “I’m very proud of the players, to be honest.

“We know how good Leicester are, and have been this season, but we made it an entertaining game, so I’m very proud of the performance and the effort that the players put in.”