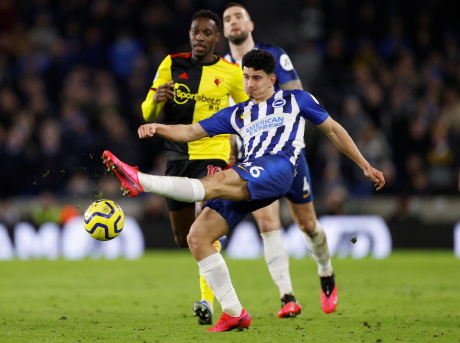 Brighton coach Graham Potter believes midfielder Steven Alzate can play a massive role for the club during the final few months of the Premier League campaign.

The Colombia international has enjoyed a breakthrough year under Potter, making 18 appearances for the Seagulls this season.

Alzate has started 12 matches in the top flight, and while he is yet to find the back of the net, he has done enough to impress Colombia coach Carlos Queiroz in recent months after making his debut in November.

The 21-year-old impressed Potter last weekend when he stepped off the bench to help Brighton earn a 1-1 draw with Watford at the AMEX Stadium.

Neal Maupay, Alireza Jahanbakhsh, Aaron Connolly, Leandro Trossard, Glenn Murray and Alzate have all given Potter plenty of selection headaches. Still, the former Swansea City boss says the latter is going to play his part before the end of the Premier League campaign.

Potter told the club’s official website: “He draws the opponent out and then he can play through, and that is a really good quality to have. He’s been struggling with a little bit of a groin problem, but he’s a good young player, and I’m delighted with him.

“He’s one of a number of players who’ll be key for us between now and the end of the season. We have to keep working and pushing. I see a lot I am optimistic about, but at the same time you know this league is relentless in terms of the quality of the opposition you come up against, and so you have to keep fighting.”

Brighton are only three points above the drop zone after failing to win any of their last six games in the top flight. Potter’s men return to action after the winter break as they travel to Bramall Lane to face Chris Wilder’s high-flying Sheffield United.