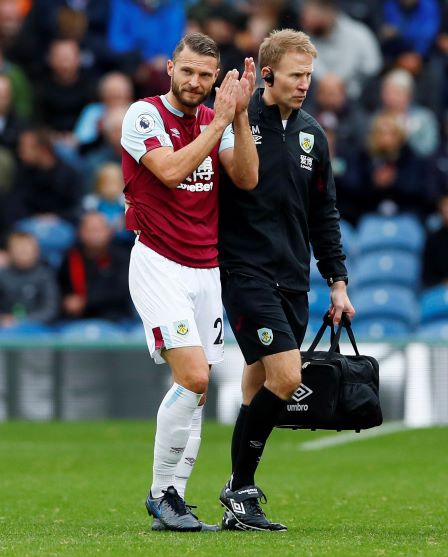 Erik Pieters has revealed why he turned down the chance to return to the Netherlands with PSV Eindhoven when Burnley came in for him last summer.

Pieters was a target for his former club when he was looking for a new challenge after six years at Stoke City.

The Eredivisie club were keen to bring the Dutchman back ‘home’ to Philips Stadion – with Pieters having made over 100 appearances for PSV before he joined Stoke in 2013.

PSV were looking for an experienced left-back to help them wrestle the domestic title back from Ajax after finishing second in 2018-19, but Pieters was swayed by a different challenge.

Earlier this month, he told Dutch podcast WereldPod his thinking at the time of Burnley’s offer of a two-year deal with a further one-year option at Turf Moor.

“PSV called me – asked if I was interested in returning,” he said of the interest that was early in the summer transfer window.

Pieters, however, did not want to commit himself straight away as he intended to keep his options open in case something else cropped up.

He added: “I was on vacation. I wanted to enjoy it and, above all, not to make an early decision. Finally, Burnley came, then the choice is a bit different, because I’ve been in England for six years.

Former PSV coach Mark van Bommel, who was his international and club team-mate, did his best to change the left-back’s mind, but even the great Dutch midfielder could not convince Pieters to go back to North Brabant.

“I was just open and honest,” he concluded. “He wanted me to be there as an experienced voice, and to help the boys. As I said, it was just too early to decide.”

Pieters began the season in great form for Burnley and enjoyed a run in Sean Dyche’s line-up for the first three months of the campaign.

But he lost his place to Charlie Taylor just before Christmas and has not started a Premier League game since December 14.