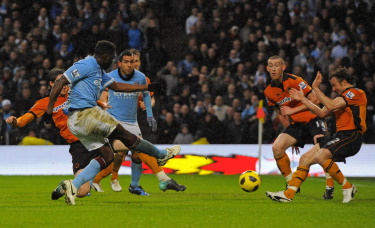 On this day in 2011, Manchester City and Wolves played out a thriller at the Etihad stadium with the former winning 4-3.

Wolves travelled to Manchester with former City defender Mick McCarthy at the helm and arrived in Lancashire in poor form after slipping into the relegation zone.

The Midlands club had only picked up 21 points from as many matches, but they gave City a huge scare in their quest for the Premier League title.

City, led by Roberto Mancini were second in the table at the time, within touching distance of Manchester United, although the Red Devils had played three games less.

McCarthy’s men took the lead inside the 10th minute when Nenad Milijas poked in the opener after a dangerous cross from winger Matt Jarvis. Jarvis’ ball in struck Aleksandar Kolarov, but Wolves were still able to react in time to tap home.

City eventually found a way back into the game thanks to an unlikely source, with defender Kolo Toure grabbing a rare goal after coming up for a corner in the closing stages of the first half.

Mancini decided to start new signing Edin Dzeko, with the Bosnia and Herzegovina international joining the club for £27million. That decision pushed Carlos Tevez wide on the left, but they adjusted their tactics in the second half to devastating effect.

The Argentine, now playing at Boca Juniors for the third time in his career, decided to try and do it all himself in the 49th minute and he did just that.

Tevez, with his characteristic bull in a China shop style, took on several defenders before slotting the ball past Wayne Hennessey.

Former Barcelona midfielder Yaya Toure then made it 3-1 after latching onto the end of a pass from Dzeko. The now Roma forward’s through ball was perfectly weighted and Toure nutmegged Hennessey with 36 minutes remaining.

Tevez then got his second just past the hour mark thanks to a neat header at the near post as City booked their spot at the top of the table.

However, Wolves refused to lie down, and they scored a penalty two minutes later in the 68th minute. Kevin Doyle found the back of the net to beat from 12 yards before Ronald Zubar struck past Joe Hart with four minutes remaining.

In the end, Wolves failed to find the equaliser, but it was a real show of defiance as they tried to keep themselves in the Premier League.

Four months later, they did just that as they stayed one point above the drop zone with Birmingham City, Blackpool and West Ham United all going down.

City eventually settled for third, but they got revenge on United 12 months later in the most dramatic fashion, with that famous Sergio Aguero goal against Queens Park Rangers securing their first Premier League crown.