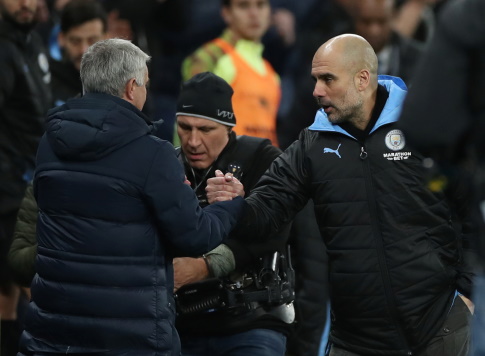 Pep Guardiola has again conceded the title to Liverpool and has suggested Premier League officials should be concerned by their winning margin.

Manchester City lost further ground on Jurgen Klopp’s men after losing 2-0 at Tottenham on Sunday, and Guardiola admitted they are now chasing silverware elsewhere, including a first Champions League title.

After the defeat at Spurs, Guardiola nodded when asked if Liverpool, now 22 points clear at the top of the table, will go on to lift the trophy.

Speaking in 2018, Scudamore spoke about wanting clubs to get closer to City, who had just lifted the Premier League trophy having amassed 100 points – now Guardiola feels those who wanted challengers for his side should also fear Liverpool’s dominance this season.

Guardiola says he is very happy with his team and the way they play, but they are nowhere near as good as Liverpool this season, so it has to be a concern for Premier League officials.

“Two seasons ago when we had 100 points we finished 19 points clear of United and in that period Liverpool were strong,” he said. “The last two seasons it was a guy, the owner of the Premier League, who said that can’t happen again and it isn’t good for the Premier League when City win the title in that way.

“So now it is Liverpool you have to be concerned about (if you are) the owner of the Premier League.”

City will no doubt strengthen over the summer in a bid to close the gap, but so will Liverpool, and there has already been suggestions that Liverpool could go on to dominate for years to come, just like Manchester United did under Sir Alex Ferguson.