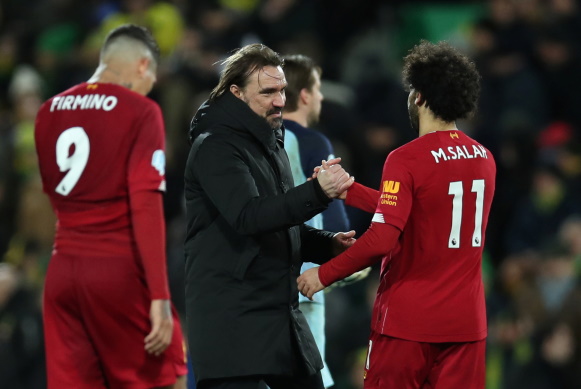 Norwich are sweating on the fitness of Sam Byram after he suffered a hamstring injury in the defeat to Liverpool on Saturday.

Norwich’s plight at the foot of the Premier League table took another turn for the worse, but boss Daniel Farke is refusing to accept defeat in the Canaries’ battle to avoid the drop.

It will be the great escape of all great escapes if the Canaries can somehow get themselves out of trouble between now and the end of the season.

They sit seven points away from safety but have played a game more than most of the teams above them and will have to go on an incredible run to get out of trouble.

However Farke is not giving up, and says neither are his players despite the 1-0 defeat against Liverpool.

So close to getting a result today. We can be proud as a club how far we’ve come and the belief is still there with performances like this we can do the unthinkable.. #NORLIV #NCFC pic.twitter.com/Zgn4pAHu1q

The full extent of the damage has yet to be revealed, but it does not look to be too promising.

“It’s a muscle fibre problem in his hamstring,” said Farke. “It was very painful for him, he left the ground on crutches so it will be a few weeks that he’s out. I hope the season is not over for him.”

As for the game itself champions elect Liverpool flailed for fluency in a challenging first half as the conditions ruined the Carrow Road encounter.

Sadio Mane removed any frustrations for Jurgen Klopp’s side though by plucking Jordan Henderson’s lofted pass out of the air with a fine first touch, before poking past Tim Krul to kill the Canaries’ stubborn resistance.