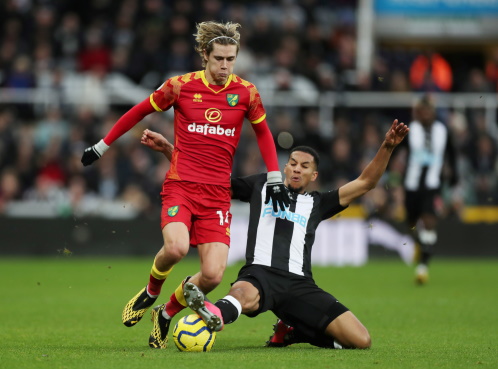 The Canaries are currently eight points away from safety after the first 25 matches of the season.

Daniel Farke’s troops have picked up only 18 points so far, and just one win in five has ramped up the pressure.

The East Anglians were last in action in the Premier League on February 1, with Farke’s men securing a 0-0 draw at Newcastle United.

Norwich’s three-match unbeaten run at home will give them a lift as they prepare to take on Liverpool on home soil.

Draws with Tottenham and Crystal Palace were followed by a win against Bournemouth and Cantwell is refusing to give up hope.

Interview with Todd Cantwell (AKA the Dereham Deco, AKA the Justin Bieber of Norwich) with @chris_sutton73. Well spoken, driven and don't call him arrogant https://t.co/yvZGCqv7Zv

The 21-year-old has scored six goals in 25 matches so far this season, and he has been linked with a summer move, regardless what division Norwich are in.

A big-money switch could be on the cards, but Cantwell says he is living his dream at Carrow Road and he has backed the squad to escape the drop.

He told the Hull Daily Mail: “We’re playing at a level where we can definitely pull wins together and catch up.

“I’m a bad loser. I sit there, and I’m almost looking for someone to be happy about losing and then I’m fuming. To be fair, in this changing room, the way we’ve all bonded from coming up, we’re all aligned in that sense

“Naturally, any individual wants to try to get to the highest level they can. But at the moment, we’ve got a big task on our hands. I’m fully focused on taking us to where we should be and where we should remain.”

Norwich’s fixtures are incredibly tough over the next few weeks, with Wolves, Leicester City, Tottenham and Sheffield United all to come after the clash with the league leaders.