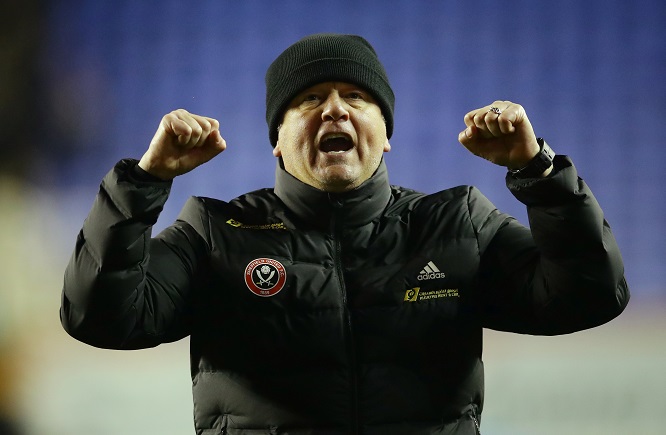 Sheffield United manager Chris Wilder has heaped praise on his squad after they beat Reading to reach the FA Cup quarter-finals.

On Tuesday evening, the Blades sealed their place in the last eight of the competition for the first time since 2004 after an extra-time winner secured a 2-1 victory at the Madejski Stadium.

David McGoldrick’s first goal of the season gave the South Yorkshire club the lead in the early stages before George Puscas’ penalty just before half-time got Reading back on level terms.

Neither side could find a winner in normal time, meaning the game was sent to extra-time.

Club captain Billy Sharp popped up to score the winner in the 105th minute to send the Blades through at the expense of the Championship outfit.

It carries on the remarkable season they have had under Wilder, defying expectations on their return to the Premier League.

There are genuine ambitions of United qualifying for Europe given they sit eighth in the table, just five points of fourth-placed Chelsea although with a game in hand.

The Blades have never qualified for European football in their 130-year history and could conceivably do so via either their league position or with an FA Cup win.

Speaking after the Reading game, Wilder, who has been in charge of his boyhood club since 2016, says he is delighted with the position his side are currently in and wants them to carry on playing to a high level.

“To get 40 points at this stage of the season, with 11 games to go, is a great achievement from a promoted side,” said the 52-year-old.

“I can’t see them backing off, I won’t allow them to back off, and they’ve got a hunger as a group, and a desire to go on and attack the next game.”

Wilder’s side are next in action on Saturday when they host bottom side Norwich at Bramall Lane.

They have a game in hand against strugglers Aston Villa due to their involvement in Sunday’s Carabao Cup final, with a date yet to be announced.