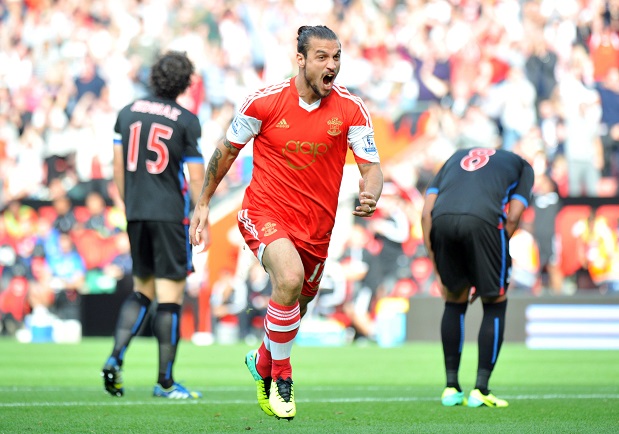 Dani Osvaldo has returned to professional football after a four-year hiatus… touring with his rock band Barrio Viejo.

The former Southampton man could hardly be described as a big success at St Mary’s, only scoring three goals in his half-season spell on the south coast.

He was bet remembered for instigating a training ground row with team-mate Jose Fonte which allegedly ended with Osvaldo headbutting the defender.

Following numerous, short-lived spells elsewhere, in August 2016, the forward decided to hang up his boots and swap headbutting for headbanging.

Osvaldo’s other passion in life was music and he was the frontman in the rock band which played in festivals around his homeland – a reason why he turned down a move to Sevilla under former Argentina boss Jorge Sampaoli.

He also finished third in the Italian version of Strictly Come Dancing, displaying the sort of movement those at Southampton never got the chance to see.

Osvaldo has decided to start playing again after signing for Banfield (presuming Argentinian rock music is not quite as lucrative a career option as being a footballer) and there are others whose post-retirement plans have taken a similarly weird turn.

For a rough, rugged centre-back who spent most of his career battling it out in the Championship, it was probably a surprise to discover Jody Craddock’s penchant for oil pastels and poster paint.

However, the 44-year-old proved to be deadly serious about his ambition to become the Black Country Van Gogh and in November 2015, his maiden exhibition of works, entitled “Le Bellezza Della Fusione”, was showcased at the Antidote Art Gallery in Lutterworth, Leicestershire.

The creative industries seem to be a good starting base for players to immerse themselves into when retirement approaches. Many do punditry, which leads to radio work, presenting, podcasting etc.

A real curveball was thrown though by the BBC in 2015 when the executive producer of Homes Under The Hammer did what literally no-one else was thinking and offered former Coventry and Aston Villa forward Dion Dublin a co-host role alongside Martin Roberts and Lucy Alexander.

Presumably, they thought he would have experience in real estate, given how often he will have moved to a new house during his career? But to many, it seemed a very odd choice.

However, few post-retirement careers are as high profile as Dublin’s. Some are just perfectly “normal, everyman” jobs.

Like the path taken by former Carlisle goalkeeper-scorer Jimmy Glass. The man who saved the Cumbrian club from dropping out of the Football League in 1999 after scoring a last gasp winner to relegate Scarborough.

That was his peak moment. Glass was a smash hit in the lower leagues but after several years milling about as a second-choice keeper, he retired to become a taxi driver.

Now, he is a play liaison officer at Bournemouth and reportedly shows all their new signings the video of him scoring that goal – after taking care of trivial matters such as helping them find a home, putting the kids into new schools etc.

Law enforcement is also a popular option – while goalkeeper Shane Supple didn’t quite manage to get into the Irish Garda after quitting Ipswich in 2009, Arjan de Zeeuw has forged a new career in his native Holland as a detective.

The ex-Barnsley and Wigan centre work as part of the police force, specialising in forensics and examining drugs and human trafficking crimes.

Some though, prefer a slightly lighter career option when they hang up their boots.

Take John Chiedozie for example – the former Spurs and Nigeria winger runs a bouncy castle rental company in Hampshire bringing joy to many a birthday party in the New Forest area.

If any footballers, particularly in the lower leagues, are in their mid-thirties and pondering their next career move, then fear not. These lads show the sky is the limit.