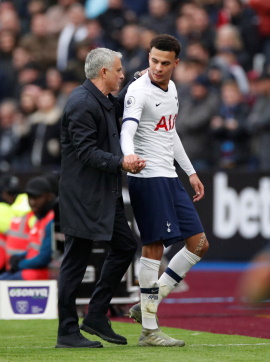 Tottenham are hopeful Dele Alli will be fit to face Southampton in their FA Cup fourth-round replay on Wednesday.

Alli limped off in the second half of Sunday’s 2-0 win over Manchester City, having earlier been subjected to a reckless tackle by Raheem Sterling, who was lucky to escape a red card.

Mourinho feared the injury could be a bad one, but it has turned out not to be serious and the England midfielder will be assessed before Wednesday night’s game.

Meanwhile, Ben Davies has returned to full training following an ankle injury picked up in Mourinho’s first game in charge in November, but the game against Saints comes too soon.

The left-back should be ready for Spurs’ next Premier League game after the winter break when they take on Aston Villa on February 16.

The rest of the players will get a break after Wednesday night’s game, but the same will not apply to Davies, who will continue training.

New signing Steven Bergwijn began his Tottenham career in style with a debut goal in the win over City but he is ineligible to play in this round of the competition and will watch on from the sidelines.

For Saints they are likely to be without midfielder Stuart Armstrong, who picked up a hip injury in the first clash between the two sides and will not be risked.

The winners of tonight’s replay will host Premier League rivals Norwich City in the fifth round of the FA Cup and will be one game away from the quarter-finals.