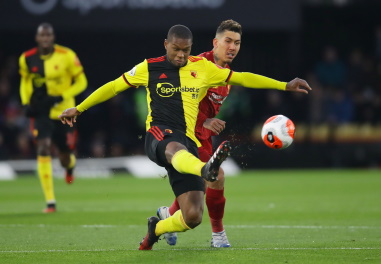 Kabasele was at the heart of the Hornets’ defence for the thrilling 3-0 victory at Vicarage Road that saw Watford end Liverpool’s 44-match Premier League unbeaten run and deny them a chance of going through the whole season as ‘invincibles’.

The result sent shock waves around the Premier League and has left many wondering how a club in Watford’s lowly position could have upset Jurgen Klopp’s men so emphatically.

Much attention was placed on Watford’s tactical approach to the game and Kabasele confirms that Pearson’s men adhered to the pre-match gameplan.

“We noticed that they commit a lot of players in attack so maybe at some moments we would have a one-on-one situation with their defender or maybe we would have a lot of space in behind,” he said.

“When you see our second goal that’s how we scored — a simple pass in behind the defence, after (which) Ismaila Sarr did the job.”

The defeat at Vicarage Road has been followed by two more, sending Liverpool crashing out of the FA Cup and Champions League.

Kabasele also spoke of the amount of preparation in training that went in to that performance and says Watford should have the confidence to beat any side – particularly after other notable results this season against Manchester United, Arsenal and Tottenham Hotspur.

With nine games to go, Watford are still precariously perched just above the relegation zone on goal difference – and Will Hughes has this week stated that the Hornets must capitalise on their home form to earn enough points to stay up.

The Hornets have won four of their last six home games against Leicester, including the famous 3-1 play-off semi-final victory in 2013 that was secured by Troy Deeney’s dramatic last-minute goal.

Watford’s home form has been pretty solid since Pearson took over in December with four wins and a draw from their six Premier League matches at Vicarage Road.