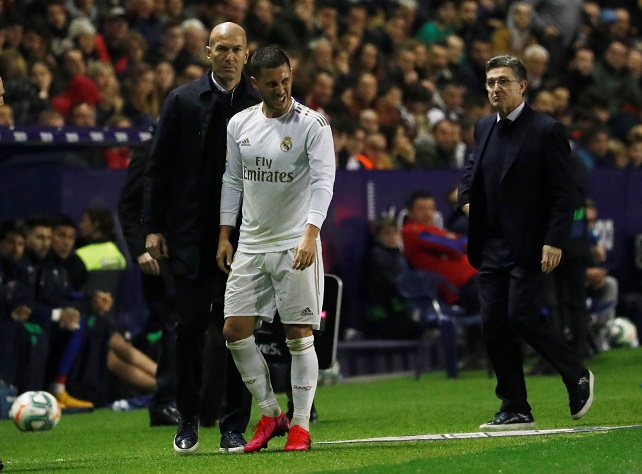 Real Madrid have been dealt a blow with the news that Eden Hazard will be unavailable for the first leg of their Champions League tie with Manchester City.

The Belgian was forced off just after the hour mark during their shock 1-0 loss to Levante on Saturday night.

He was replaced by Vinicius Junior but the Brazilian could not get Los Blancos back into the game as Zinedine Zidane’s side fell two points behind Barcelona in the title race.

Hazard has endured a very frustrating debut season in Spain after making the big-money move from Chelsea in the summer.

Despite being signed to become the main talisman at the Bernabeu, the 29-year-old has spent most of the campaign so far on the treatment table.

Saturday’s match was just Hazard’s second back in action following an ankle injury which kept him out for three months.

However, another ankle problem has befallen the luckless playmaker and he is set to miss a significant period of time, despite the club not putting any timescale on his recovery.

A club statement said: “Following the tests carried out today on our player, Eden Hazard, by the Real Madrid medical department, he has been diagnosed with a fracture to his right distal fibula. His recovery will continue to be assessed.”

Following the first leg against City, which takes place at home on Wednesday, Los Blancos face Barcelona in a crucial El Clasico test next Sunday.

Real lost their grip at the top of the table with Barcelona’s 5-0 win over Eibar earlier in the day sending them to the summit.

Hazard will have to watch on ruefully as his terrible debut season in Spain continues.

He has played just 15 times for Madrid this season, only scoring once – in October’s 4-2 win at home to Granada.