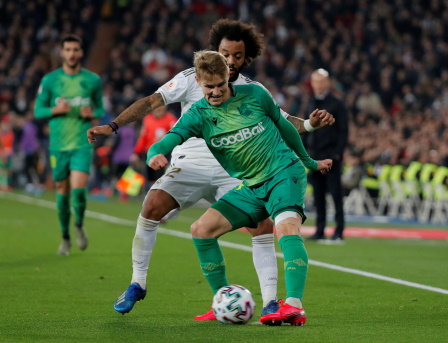 Real Sociedad midfielder Martin Odegaard says he is very happy at the club and does not plan to end his loan spell from Real Madrid early.

The Norwegian international grabbed the headlines in 2015 when he signed for Madrid from Stromsgodset.

He played two seasons with Real Madrid Castilla scoring five goals in 58 appearances, while also playing one game for the senior team.

Odegaard was then loaned to Heerenveen in the Eredivisie in 2017, before returning to the Netherlands with Vitesse a year later.

Madrid and Sociedad agreed a deal in July 2019 with the latter opting to extend it for a further season. He has since scored seven goals in 26 LaLiga appearances but reports claimed he will return to the Santiago Bernabeu this summer.

Odegaard is flying at @RealSociedadEN

He's set himself two targets for the end of the season

However, the 21-year-old believes his game will develop quicker if he stays with Sociedad.

He has already helped his team knock his parent club out of the Copa del Rey and Odegaard says he is enjoying life at the Anoeta.

Odegaard told El Diario Vasco: “When people ask if I will be here to play in the Champions League, I always say that I’m very happy here and that the plan is to play for La Real for two years.

“Two things make me very excited, as we want to win the Copa del Rey and qualify for the Champions League.

“I spend every day looking at the photo in Zubieta in which you can see the cup which was won in Zaragoza. I learned very quickly of the importance of this picture and now I look at it with envy.”