Begovic delighted to have joined AC Milan on loan 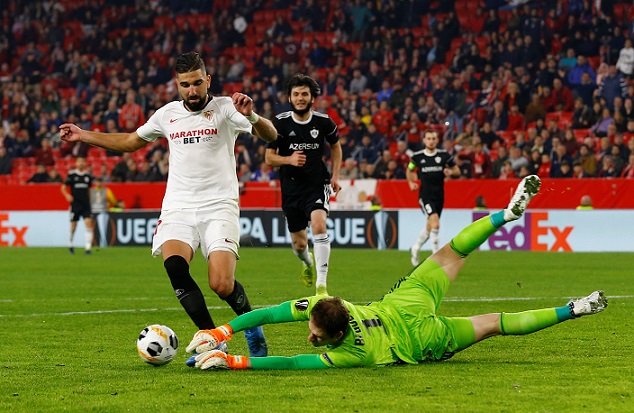 Goalkeeper Asmir Begovic says he is over the moon to have joined AC Milan calling it an “honour”.

The Bosnian goalkeeper sealed a six-month loan deal from Premier League outfit Bournemouth on Tuesday, after falling down the pecking order at the Vitality Stadium.

Begovic spent the first half of the season on loan at Azerbaijani outfit Qarabag but will now link up with the San Siro team for the rest of the season.

The deal includes no option to buy at the end of the season, and he is likely to play second fiddle to first-choice Gianluigi Donnarumma.

With Pepe Reina departing for Aston Villa, Milan moved quickly to sort out a backup option and Begovic fit the bill.

Speaking to the press for the first time on Thursday along with fellow new recruit Simon Kjaer, who signed on loan from Sevilla, Begovic says he hopes to help the team as much as possible for the rest of the season.

“It is an honour for me to be here, it is an honour to be part of a club so full of history. The first few days here have been fantastic, I want to bring Milan to the top. I’m here to help the team and do my best,” he said.

Begovic also commented about his future longer-term and says he will evaluate all his options during the summer, after playing little football over the last year.

“For now this is the situation, in six months we will evaluate. There were some things that didn’t work outside of Bournemouth but I’m happy to be here,” he continued.

He will hope to be involved in the matchday squad for the first time when Stefano Pioli’s men face Udinese at home on Sunday.