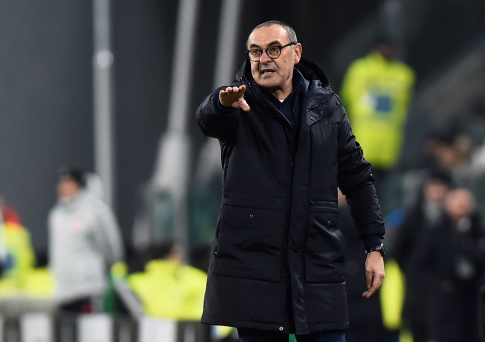 Maurizio Sarri says the title race is far from over after watching his Juventus side move four points clear at the top of Serie A.

There has been little to separate Juve and Inter Milan in the first half of the season, but the gap is now the biggest it has been after the Bianconeri beat Parma 2-1 on Sunday.

The crucial win came after the Nerazzurri were held to a surprise draw against Lecce, and it is now advantage Juventus in the race for the Scudetto.

Despite the gap, Sarri says there is still a long way to go and is refusing to get carried away. Particularly as his side were far from convincing with the win and needed two goals from Cristiano Ronaldo to get them the three points.

“The last thing I want to hear is that the ‘title race is over, the title race is back on’ every Sunday,” Sarri told the press.

“It was an important game to win. We had a less polished match than the recent ones, and I tried to give the team the impetus to close it by bringing on [Gonzalo] Higuain, and make sure of the three points.

“We were under the cosh in the final few minutes, but the positive lesson to take from that is that we are able to take that pressure more than two months ago.”

Ronaldo was the hero once again and has now scored 11 goals in the last seven matches and it’s a “brilliant number”, according to Sarri, who knows the Portuguese ace will be pivotal in keeping his side in front of Inter.