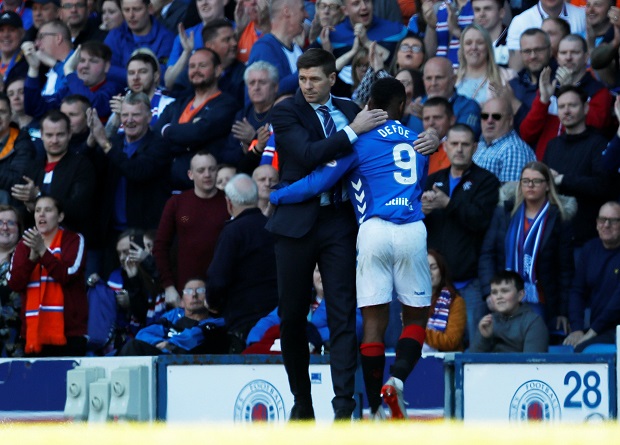 Rangers boss Steven Gerrard has hailed the efforts of the ever-young Jermain Defoe after his goal secured a 1-0 win over St Mirren.

The Light Blues kept themselves in touching distance of Premiership frontrunners Celtic as they managed to edge past St Mirren at Ibrox on Wednesday night.

Defoe’s goal proved the difference as his first-half effort wrapped up a vital victory to leave Gers just two points behind the Hoops with a game in hand over Neil Lennon’s side.

Speaking after the 37-year-old former England striker’s 16th goal of the season, Gerrard revealed how impressed he has been with the experienced forward.

“JD has been big for us,” Gerrard said. “Two starts on the spin and two goals. He’s a predator in the box. It’s the reason why I brought him in.

“We’ll rest him up and have him ready for Hearts because he’s been to Hearts before and scored goals and let’s hope he can do the same at the weekend.”

“In terms of the outcome and result, it gets us closer to where we want to be, six wins on the spin,” Gerrard added. “So I’m positive, I’m happy.”

Rangers travel to a Hearts side sat rock-bottom of the Premiership table on Sunday.

The Edinburgh outfit, who now have former Barnsley boss Daniel Stendel at the helm, have endured a torrid season so far and their 14 points from their first 22 games leaves them four points adrift at the bottom of the standings.