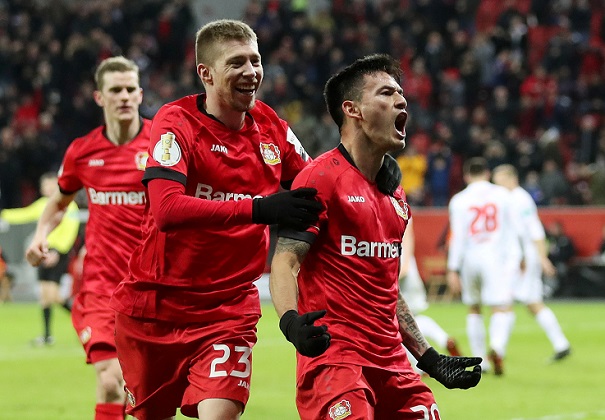 Bayer Leverkusen midfielder Charles Aranguiz is the subject of interest from clubs outside Germany, according to his agent.

The 30-year-old has played a very important role for Peter Bosz’s side so far this season, turning out 26 times for the side currently fourth in the Bundesliga table.

He has scored one goal this term as Die Werkself aim to qualify for the Champions League next season.

Aranguiz is out of contract at the end of the current campaign and does not appear likely to sign a new deal.

He has received interest from elsewhere with Diego Simone’s Atletico Madrid named as a club keen to sign the Chilean.

The La Liga outfit have been linked with a number of midfielders ahead of the summer transfer window with Manchester United’s Nemanja Matic also in the running.

Beyond Atletico, Italian sides Atalanta and Fiorentina have also been credited with genuine interest in Aranguiz.

When we hosted Union Berlin in the DFB Pokal in 2017, that match ended in a 4-1 win for the Werkself and was topped off with this brilliant free kick from Charles Aránguiz! pic.twitter.com/hL8Epoldum

His agent Fernando Felicevich has told Chilean media that his client is attracting interest, but that no concrete offers have been made for his services.

“We are still waiting for some offers from Europe,” he said.

Felicevich went on to say that if nothing comes to fruition from Europe, then a move back to his native Chile could be a possibility.

Aranguiz started his career at Cobreloa and has also represented Cobresal, Colo Colo and Universidad de Chile in his homeland.

The agent says a move back to South America would not be considered a downgrade.

“If nothing convincing comes, there is always a possibility of returning [to Chile]. Charles is very close to Chile and I wouldn’t call it a step backwards,” he added.