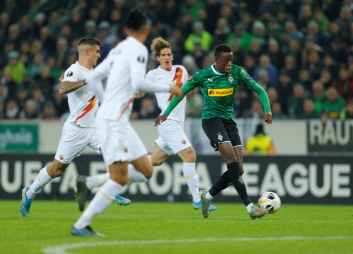 Borussia Monchengladbach are bracing themselves for more interest in Denis Zakaria following reports Liverpool have joined the race.

The Swiss midfielder has earned rave reviews following his performances in the Bundesliga this season and Manchester United have already been heavily linked with a swoop.

United are keen to sign a midfield enforcer as doubts surround the future of Paul Pogba and Nemanja Matic, and Zakaria is said to be on their list of possible targets.

Reports in the German press are now claiming that Liverpool are also in the hunt and could be willing to match the £40million that Gladbach would be looking for if they did decide to cash in.

Much depends on whether Gladbach can qualify for the Champions League. There is so much uncertainty around the completion of the season following the outbreak of the coronavirus but if they can make it, then it increases the chances of keeping hold.

Gladbach’s sporting director Max Eberl certainly thinks that is the case and says he is confident of keeping hold if they secure a place in Europe’s elite competition.

“I think that there is a very good chance that Denis will still be with us next year if we qualify for the Champions League,” he has been quoted as saying.

They currently sit fourth in the Bundesliga standings but it remains to be seen what effect the break in play will have on them and the teams around them.

Whatever happens Liverpool are likely to test Gladbach’s resolve and Manchester United could do the same.