Bellingham would be right to consider Dortmund for his development 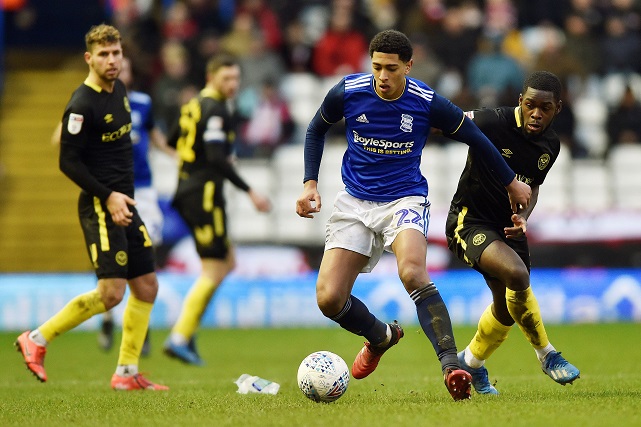 Borussia Dortmund have been strongly linked with Birmingham wonderkid Jude Bellingham and he should seriously consider a move.

The 16-year-old has burst on to the scene from nowhere for the Blues this season after making his debut in August.

Unlike many players of his age, who are dipped in and out of first-team football, Bellingham has been a constant presence in Pep Clotet’s plans, making 34 appearances across all competitions this season.

Birmingham’s Jude Bellingham has made more English league appearances than any player under-17 this century
📈📈📈📈 pic.twitter.com/ibXgSBVI0C

He grabbed his first goal in just his second Championship appearance – a 2-1 win against Stoke City – and has since added three more to his tally.

With Birmingham’s play-off hopes very faint at this stage of the season, it appears unlikely he will be representing them in the Premier League any time soon.

Inevitably, the hype surrounding the playmaker has gone into overdrive and several huge clubs have been linked with a move for the Stourbridge-born teenager.

The likes of Manchester United, Manchester City, Liverpool and Chelsea have all been quoted as potential suitors by various reports.

However, the strongest link so far appears to have come from abroad, with Borussia Dortmund thought to be keen on a deal as soon as possible.

Borussia Dortmund have agreed terms with Birmingham City teenager Jude Bellingham, according to Sport Bild. He had been linked with Man Utd. #BVB #BCFC #MUFC

An eye-watering £30million fee is the sum Dortmund are willing to pay the Blues to land the England Under-17 midfielder, according to the latest speculation.

It would be a monumental statement from Dortmund if they did buy Bellingham for that amount – and also a huge vote of confidence in his ability to perform at the highest level.

Ultimately, it is a move that might suit the development of a player described as one of those most “intelligent” to come through the age groups in recent times, according to former player and fellow Birmingham academy product Darren Carter.

If, for example, Bellingham was to move to Manchester City, how much game time would he get? Given how little relative football Phil Foden gets, aged 19, it seems unlikely the Birmingham man would make a huge impact at the Etihad.

Dortmund, by contrast, pride themselves on developing young talent, even if they do not hail from Germany. The most striking example, in England at least, is that of Jadon Sancho.

Looking to try and break into the first team, Sancho decided to forego of the riches of Manchester City and move to another country in pursuit of his dream aged 17.

Nearly three years later, it has proved to be an inspired decision and the London-born winger is one of the most sought-after players in the world.

As well as Sancho, there are the examples of Erling Braut Haaland and Giovanni Reyna to observe.

The former has been thrust straight into first-team action following his January transfer from Red Bull Salzburg and has repaid the faith by continuing his phenomenal goal record.

And Reyna has broken into the team as a 17-year-old, with Dortmund clearly trusting the player they brought in from New York City FC in 2019.

At Dortmund, they are prepared to give young players an opportunity because they know they also have the experience and nous in the dressing room to back them.

That’s not to say that Bellingham would walk straight into the first team if he made the move to the Westfalenstadion – he would have the tricky task of displacing the likes of Thomas Delaney, Axel Witsel and Julian Brandt first.

But, if he were to make the move to the continent, Bellingham’s prospects of playing top-level football would be far greater than if he joined a so-called “big” club in England.

For that reason, he should seriously consider any offer that comes from Lucien Favre’s club.