Home Eredivisie Ajax What next for Ajax’s current crop of stars?

What next for Ajax’s current crop of stars? 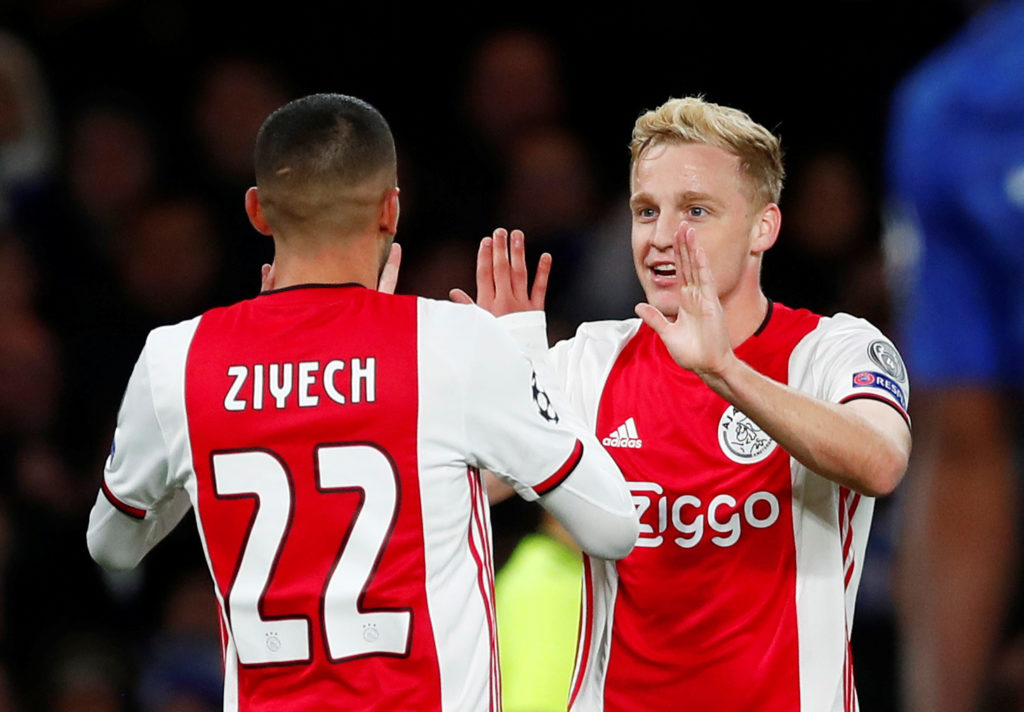 For decades Ajax has been a talent factory and while these days not all their big names are homegrown, they have a knack of developing superstars.

Wednesday’s news that Chelsea are close to a deal for Hakim Ziyech raised a few eyebrows due to the Blues not having been heavily linked with him before. However, it is no surprise the brilliant Moroccan is set to be on his way and that deal could be the first of many.

Former players and now club officials Edwin van der Sar and Marc Overmars have been open about the club’s business plan of selling players for high prices and reinvesting, especially after missing out on the last 16 of the Champions League this season. With plenty of talent coming through the ranks and an almost unparalleled scouting network, another busy summer of incomings and outgoings is expected.

Even manager Erik ten Hag has been linked with an exit and after Matthijs de Ligt and Frenkie de Jong departed for Juventus and Barcelona respectively last year, who will be in the latest cohort of big-money departures from the Johan Cruyff Arena?

As mentioned above, the 26-year-old looks on his way with a €45m euros deal thought to be close.

Ziyech joined the club from FC Twente in 2016 and inspired the team to the 2017 Europa League final and the semis of last season’s Champions League.

The Moroccan international previously spurned offers from Roma and Sevilla and his patience looks to have paid off with his switch to SW6 expected to go through by the end of the week.

Somewhat of a new kid on the block, Dest has made the right-back position his own in 2019-20 following a slow start to the season for previous incumbent Noussair Mazraoui.

Foot and ankle injuries hurt Mazraoui earlier in the campaign and Dest has shone, making 24 appearances this term.

Born in Almere but a USA international through his father, it is interesting that Bayern Munich are keen amid renewed speculation over their desire to appoint Ten Hag.

Reports in the Netherlands suggest a €25m move to the Allianz Arena is all but done for the 19-year-old and it would not be so bad for Ajax, with, of course, Mazraoui ready to come back in.

Bayern are ready to sign Sergiño Dest (19) in Summer 🔥

Ajax would accept €26m offer for the Dutchman. [Telegraaf]pic.twitter.com/gy4RmBpCmz

Goalkeeper Onana may wear the 24 shirt but he has been the number one pretty much since heading to Amsterdam in 2015.

Ajax and Barcelona have a strong history of swapping players and anyone who watches the goalkeeper play will not be surprised to learn he has spent time with the Catalans when they see how cool he is on the ball.

Standing at 6ft 3in and with the agility to make world class saves, the 23-year-old has been linked with Chelsea due to Frank Lampard’s misgivings over record signing Kepa Arrizabalaga.

Finally to the one likely to cost the most of all these starlets, with Transfermarkt rating his value at £49.5m. Real Madrid looks the most likely destination with repots in the Dutch press previously claiming that a deal is already in place for him to move this summer.

Perhaps not as tidy as some of his colleagues, the 22-year-old has the almost forgotten ability to break the lines in midfield, both when making timely defensive blocks and scoring vital goals.

Van de Beek was the third man in the engine room trio that got the team to last four of the Champions League, providing the movement to complement De Jong’s guile and Lasse Schone’s grit.

Both of those headed off last summer, Schone joining Genoa but the 22-year-old looks set for bigger and better things as the Bernabeu beckons.