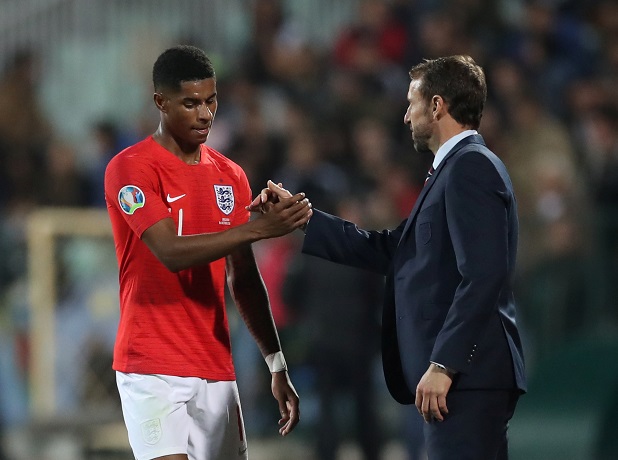 Marcus Rashford could miss the remainder of the season - a major blow not just to Manchester United but also to England ahead of Euro 2020.

The 22-year-old has enjoyed a productive season in what has been another difficult year for the Red Devils in the post-Ferguson era.

He has scored 22 goals in 37 appearances across all competition for club and country, showcasing his importance for United and England.

However, his season took a turn for the worst when, after coming on as a substitute in United’s 1-0 FA Cup replay win over Wolves in January, he injured his back in a collision with Matt Doherty.

It is clearly a delicate injury and boss Ole Gunnar Solskjaer says he will not fast-track his recovery.

“We can’t rush him,” he said. “Hopefully he will play again this season, but it will be touch and go towards the end.”

It means Gareth Southgate now has to sweat on the fitness of another centre-forward going into the European Championship this summer – a tournament England are expected to advance far in.

The pressure has been ramped up following their heroics at the World Cup two years ago but, unlike then, injuries appear to be a big problem.

Harry Kane is obviously the biggest concern as the captain and talisman has not played for Tottenham since New Year’s Day after suffering a hamstring injury in their 1-0 loss at Southampton.

Rashford would have been the most likely deputy but now appears to be in the same boat as Kane – unlikely to be match fit even if he does make the Euro 2020 squad.

Even tertiary option Tammy Abraham has been troubled by injury problems in recent weeks. The 22-year-old has suffered a series of niggles since the autumn and missed Chelsea’s 2-0 loss at home to Manchester United on Monday.

It means Southgate will have to have a rethink going into March’s friendly matches against Italy and Denmark.

In-form strikers Danny Ings and Dominic Calvert-Lewin could find themselves in contention.

Ings, who won his solitary Three Lions cap in 2015 after an impressive start to life at Liverpool, has scored 18 goals in 30 games for Southampton, while Everton’s Calvert-Lewin has looked like a man re-born under Carlo Ancelotti. Since the Italian took over from Marco Silva in December, he has scored six goals in nine games.

Southgate may also opt for a more conservative line-up, by playing with a “false nine”.

Raheem Sterling would be the likely candidate given how he has performed the role for Manchester City.

Jadon Sancho is another option, with the Borussia Dortmund winger shining in front of goal this season, netting 18 goals.

It promises to be an interesting few months ahead for Southgate and represents a real test of his credentials.