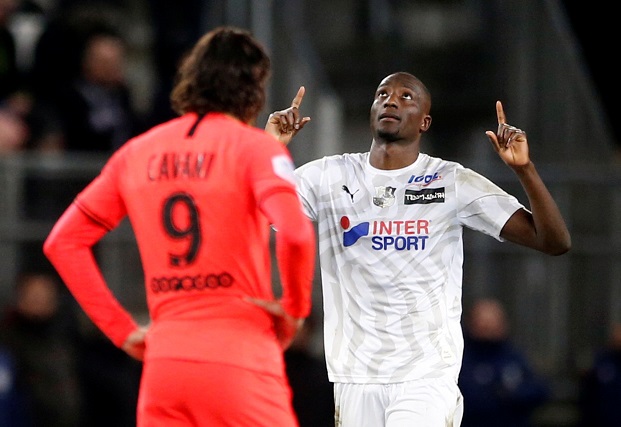 Amiens striker Serhou Guirassy is reportedly being courted by a number of clubs in Britain with a view to a potential summer transfer.

The 23-year-old made a significant impact at the weekend as the Ligue 1 strugglers pulled off a sensational 4-4 draw against table-topping PSG.

Guirassy was at the heart of the action, scoring twice in the eight-goal thriller and could have added to his tally.

He opened the scoring early and his side raced into a 3-0 lead before Ander Herrera grabbed a lifeline just before the break at the Stade de la Licorne.

PSG showed their class in making a monumental comeback to go 4-3 up but Guirassy added a second in injury time to ensure a share of the spoils in Saturday’s encounter.

It puts the former France under-20 international on eight goals for the season having scored three in his last two outings following a strike against Monaco last week.

That form appears to have attracted the attention of clubs in Britain, with Tottenham, Aston Villa, and, Celtic all thought to be keen.

Reports in France state that Tottenham’s chief scout Brian Carey was in the stands for the 4-4 draw and was impressed with what he saw from the rangy forward.

Amiens paid German Bundesliga side Koln around £5million for his signature in the summer and could look to make a significant profit, particularly if they are relegated.

According to the Daily Mail, Guirassy is now valued at £18millon as Amiens lie 19th in the Ligue 1 table, six points adrift of safety.

Spurs appear to be frontrunners for his signature as manager Jose Mourinho ponders his options up front.

Harry Kane is becoming increasingly injury-prone after suffering a hamstring problem on New Year’s Day while Son Heung-min could be out for the rest of the season after fracturing his arm.