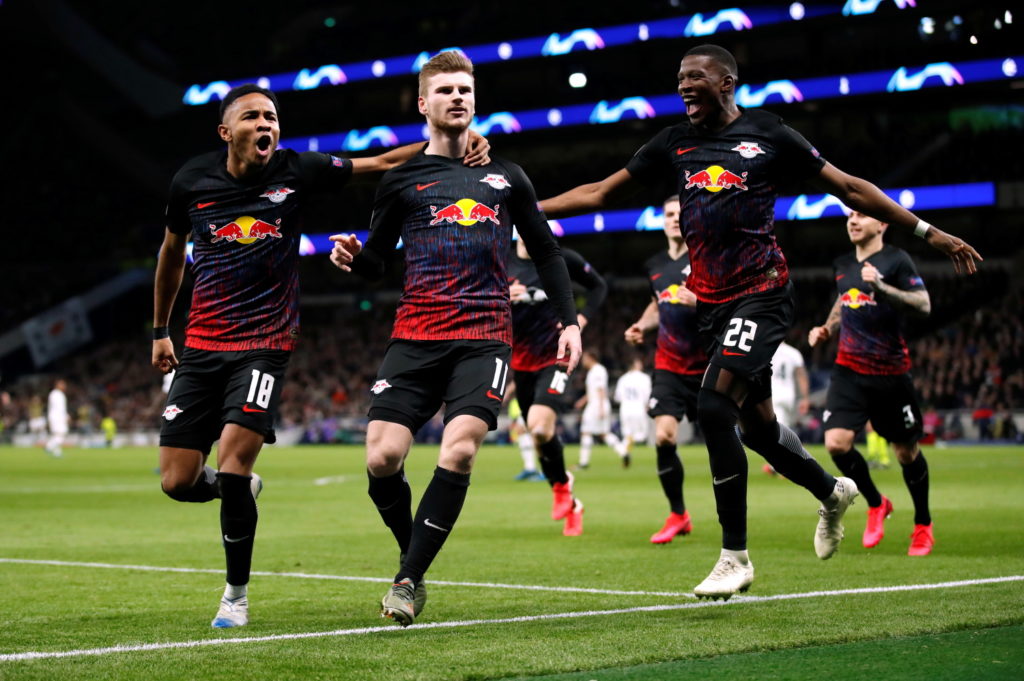 RB Leipzig striker Timo Werner seems destined for a move this summer and he may well end up playing in the Premier League next season.

Apparently the Germany international is available for a bargain £51million if a deal is agreed by the end of April.

Werner himself seems to feel he has a number of options with Liverpool, Manchester United and Manchester City all vying for his signature.

Speaking ahead of Leipzig’s Champions League clash with Spurs, he said: “At this time in professional soccer there are two different variations.

“The first is to be part of a team like Liverpool or Manchester City. They have a good working team. The teams have also great coaches.

“But this is the question: do you want to go to that kind of team, because the situation is already that hard for each member and you want to be a part of it? That’s one point you have to look at.

“The other side are teams which need some big changes, because they just won a few big titles, but they are not able to compete on the highest level anymore. For me, Manchester United is one of these teams.”

So which club would be the best fit for the 24-year-old? We’ve weighed up the pros and cons of each of the three interested Premier League parties.

Pros: Liverpool are on course to be crowned the Premier League champions so Werner would be joining a team used to winning, with the Reds claiming the Champions League crown last season.

Werner would also link up with former Leipzig team-mate Naby Keita if he made the move to Anfield, and having a fellow German as a manager in Jurgen Klopp could also be a selling point.

Cons: Finding a place in Liverpool’s attack will be a big ask for any new arrival in the summer given how settled Sadio Mane, Mohamed Salah and Roberto Firmino are as a front three. If Werner did opt to move to Merseyside he could operate in a deeper role behind that trio as he has played in similar positions for Leipzig at times this season, but becoming their number one striker will be a huge task.

Pros: The chance to work under City boss Pep Guardiola would be a huge draw for any player and now may be the perfect time for any striker to head to the Etihad Stadium. Sergio Aguero is likely to leave when his contract expires next summer, so there is a big chance for a striker to stake a claim to be the club’s main man going forward.

City also have a healthy German contingent with Ilkay Gundogan and Leroy Sane on the books, although the latter could be on the move this summer.

Cons: The glaringly obvious issue for any player targeted by City is the club’s two-year European ban. An appeal is set to happen, but if that ban is upheld it will put a big dent in City’s recruitment plans.

A space may be opening up in City’s attack as Aguero’s contract runs down, but competition for places is still tough and Werner could find himself in and out of the first XI if he doesn’t hit the ground running in Manchester.

Pros: As Werner himself said, joining Manchester United could provide any player with the opportunity to be a part of the club’s resurgence and that has to be an attractive proposition for any player. The Old Trafford side are in desperate need of a striker despite the arrival of Odion Ighalo on loan in January, in what now seems like an inspired bit of business. Ighalo could stick with the club next year but at 30-years-old time is no longer on his side and if United splashed out big money on Werner he would be ahead of the Nigerian in the pecking order almost by default.

Cons: United have had a few false dawns since legendary manager Sir Alex Ferguson retired and it remains to be seen if this current purple patch is the start of something special or not. The Premier League giants still have some way to go to close the gap on City and Liverpool, and there may be no quick fix in terms of their bid to get back to challenging for titles. On the one hand, a long-term project may appeal, but on the other, it could be some time before United get back to winning silverware on a consistent basis.