Home On This Day On this day: Rashford makes derby history for Man United

On this day: Rashford makes derby history for Man United 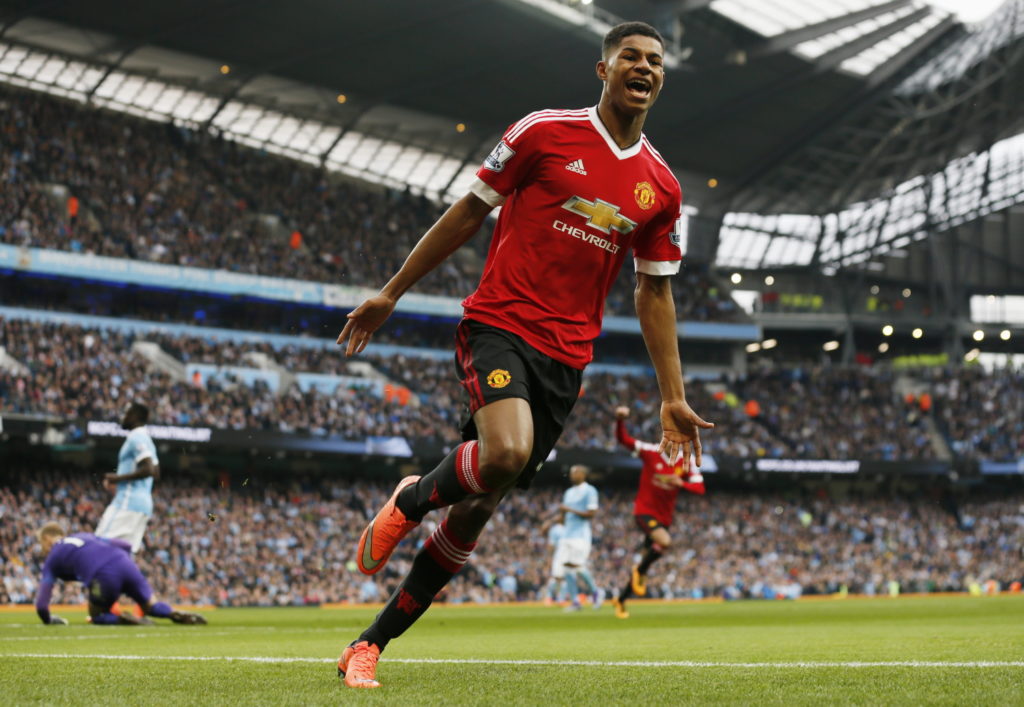 Never one to miss a big entrance, Marcus Rashford made history on this day in 2016 by becoming the youngest player to net in a Premier League Manchester derby.

Rashford enjoyed a meteoric rise, seemingly coming from nowhere to score for fun and he ended the season as part of England’s Euro 2016 squad.

The then 18-year-old burst onto the scene with a debut brace in the Europa League against FC Midtjylland on February 26.

Initially named a substitute, Anthony Martial’s injury in the warm-up provided his chance and the youngster grabbed it with both hands.

Then United boss Louis van Gaal was never afraid to throw the youngsters in and his faith in Rashford paid off. With the teams 1-1 on the night, meaning the Danes were 3-2 up on aggregate, Rashford scored his maiden professional goal when he tucked home after 63 minutes, before half-volleying his second 12 minutes later.

Ander Herrera and Memphis Depay went on to score in a 5-1 win but the headlines belonged to Rashford.

The following weekend he netted twice in the 3-2 win over Arsenal but fast-forward to March 20 and after a mini-drought, he showed just why he was so special.

After a cagey opening quarter of an hour, David de Gea played the ball to Juan Mata, who after a one-two with Morgan Schneiderlin found Rashford.

The youngster did the rest, controlling with his left foot, before showing the composure and patience to wait for Martin Demichelis to dive in before sprinting clear and side-footing under Joe Hart.

On this day in 2016, @MarcusRashford became the youngest player to score in a Premier League Manchester derby. pic.twitter.com/698UslARzB

Demichelis was reckless, diving in unnecessarily, but the beauty was in Rashford’s intelligence, pulling out onto the left of the City defence, therefore exposing the Argentine’s lack of pace.

That was one of just five shots United had that day and at 18 years and 141 days, Rashford had written his own chapter in history by becoming the youngest derby scorer in the Premier League era.

The result left United sixth in the table and City fourth. However, even with this win the Red Devils could not finish in the Champions League places, although Van Gaal did end his tenure with some silverware, lifting the FA Cup.

Another season in the Europa League was not such a bad thing as they went on to lift that trophy in Jose Mourinho’s first season.

As mentioned above, Rashford’s debut half-season, which saw him net eight goals in 17 appearances before scoring on his England debut against Australia, which earned him a place at Euro 2016.

Unfortunately for all Three Lions fans, he was underused during the disastrous campaign in France as Roy Hodgson’s hapless side infamously crashed out in the second round to Iceland.

The striker is currently sidelined but with Euro 2020 postponed for a year, the Wythenshawe-born forward now has time to recover.

Rashford has spent much of his career since this day in 2016 out wide but many feel he does his best work through the middle; just ask Martin Demichelis.