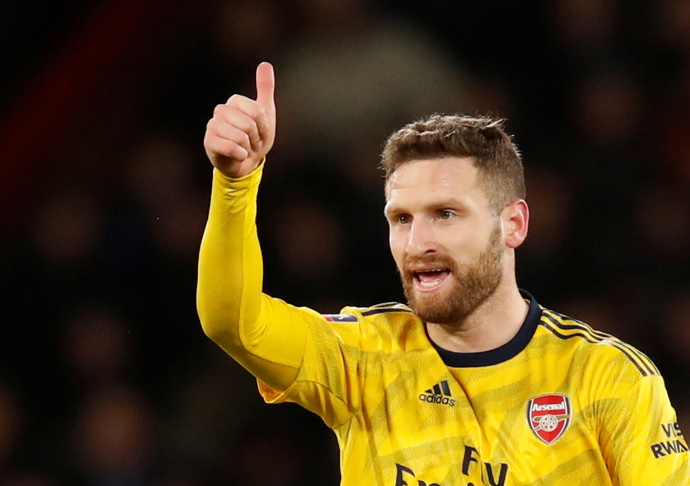 Arsenal have been boosted by the news Shkodran Mustafi's ankle injury is not as bad as first feared and he should be back in action sooner rather than later.

The 27-year-old has been enjoying something of a revival of his Gunners career of late and was one of the best players on the pitch before being taken off on a stretcher just after the hour in a 2-1 FA Cup fourth round victory over Bournemouth on Monday night.

But, after scans and checks on Tuesday, the injury was revealed to be an ankle sprain and not any lasting damage to ligaments – meaning he will be sidelined for weeks rather than months.

Mustafi was told last summer he was free to leave the club but the Germany international, signed from Valencia for £35million in 2016, opted to stay put at the Emirates Stadium.

He found himself down the pecking order and playing in the Europa League and Carabao Cup before new Arsenal head coach Mikel Arteta restored faith in a player who has faced ongoing criticism of his performances.

Mustafi has started the last three games and impressed at the Vitality Stadium before being replaced by Rob Holding.

He made a mistake which led to Chelsea’s opening goal and a red card for team-mate David Luiz in the 2-2 Premier League draw at Stamford Bridge a week ago but recovered to put in an assured display.

Mustafi recently admitted that he had been “affected” by the constant questioning of his ability but – having been linked with a January move away from the club – he now looks to be part of the plans until at least the summer.

Arsenal have been heavily linked with Flamengo centre-back Pablo Mari during the window and it is understood that move may still happen, despite the former Manchester City man travelling back to Brazil after flying to England for talks over the weekend.

It remains to be seen if Mustafi’s injury will rule him out of the club’s planned break to Dubai during their two-week spell without a game.