Youngster Saka happy to bide his time at Arsenal 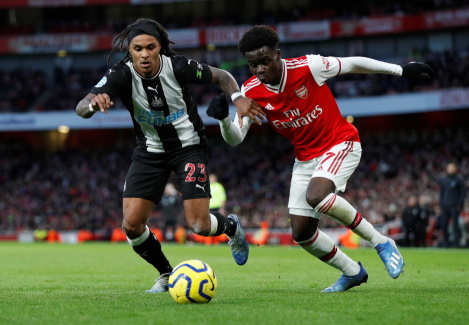 Arsenal youngster Bukayo Saka says he is still hoping he can be given a chance to play left wing this season under Mikel Arteta.

The 18-year-old has enjoyed himself this season in his breakthrough campaign, making 22 appearances in all competitions so far this term.

Saka was first given a chance last year, but he had to settle for four appearances, as Unai Emery looked at other options but the Basque used him more regularly in the Europa League this season, only to be sacked in December.

He has played out wide, through the middle and now at left-back under Arteta and the Spaniard has brought the best out of him.

Saka is now ahead of Sead Kolasinac in the pecking order at the Emirates Stadium, while summer signing Kieran Tierney is still struggling with a shoulder injury.

The England youth international grabbed another assist after teeing up Nicolas Pepe during Sunday’s 4-0 win over Newcastle United and is becoming a regular source of chances.

Saka says he is constantly learning under Arteta and although he will play at the back, he admits he would like to feature further forward in the future.

“I’m really enjoying my football under the new manager. It’s not my natural position, but he’s given me all the advice I need,” he told Sky Sports. “I feel like my dream was always to be a winger, to affect games, score goals and get assists. For now, I’ll do the job the manager asks me to.

“There’s a lot of space for me, and it’s good for me. I’m playing sort of as a winger when we have the ball, but without the ball, I have to come back and work on my clearances, my heading and stuff I haven’t worked on my whole life. I feel like I’m doing OK right now.”

Saka is out of contract at the end of next season, but he has reassured his fans that his representatives are in talks with the club’s board about a new deal.