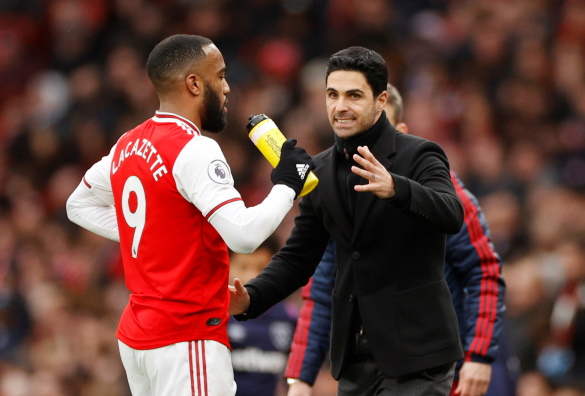 Arsenal boss Mikel Arteta saluted the attitude of Alexandre Lacazette after he came off the bench to earn the Gunners all three points against West Ham.

The Hammers had spurned a number of fine chances before Lacazette hit the only goal of the game 12 minutes from the end.

The France striker has now scored all seven of his Premier League goals at the Emirates Stadium this season – but he was made to celebrate his match-winning contribution as a lengthy VAR check overruled the initial decision to rule out his effort for offside.

The victory means Arsenal have racked up three consecutive league wins for the first time in over a year and Arteta was pleased with the impact of Lacazette, who has had to play second-fiddle to Eddie Nketiah of late.

Arteta says the duo have now presented him with a real selection headache going forward, but it is one that he is pleased to have.

“They are both scoring, both in a good moment,” he said. “I decided to play Eddie today for the defenders they had and the gameplan we had, but knowing that Laca, if we needed a goal in the final moments, he was always ready to do that.

“I saw straight away, when I was talking to him and giving him instructions on the touchline, he was alert and focused and I could see he was really determined to go out there and score the goal that he did.”

Arteta saw VAR rule in favour of Arsenal for the first time this season as Sian Massey-Ellis’ decision to flag for offside, with the check deeming Angelo Ogbonna was playing Mesut Ozil onside.

“When the goal was disallowed I thought ‘okay that’s fine’,” added Arteta.

“Then my staff came from the bench and said ‘it’s a goal’. But then it try for two or three minutes I don’t know how long, then I wasn’t very positive about the outcome. I am very pleased with the VAR tonight.”