Arteta determined to forge own identity at Arsenal 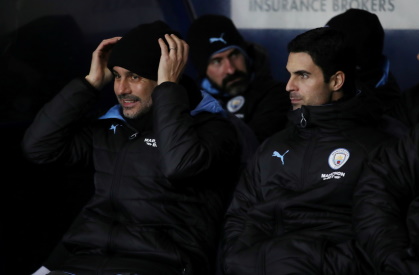 Mikel Arteta is adamant he cannot simply "copy and paste" the philosophy of Pep Guardiola onto his Arsenal side.

The Gunners head coach Arteta was set to return to former club Manchester City for the first time on Wednesday night but that match has been postponed amid conoravirus concerns.

The 37-year-old left the Etihad Stadium, where he was employed as Guardiola’s assistant, in December to replace Unai Emery in the Arsenal hot-seat.

They have not won at City since 2015 and a win on his comeback would have seen his side close within two points of Manchester United in fifth.

The Premier League have postponed our match with Manchester City on Wednesday night as a precautionary measure.https://t.co/qTX1QiXjZv

But, despite enjoying plenty of success during his three-and-a-half years working under Guardiola, Arteta reckons it is too simplistic to suggest he can replicate the same approach in north London.

“If you copy and paste it is always bad,” the former Rangers, Everton and Arsenal midfielder replied when asked if he was looking to replicate Guardiola’s philosophy.

“You have to be around every character and person. Everyone feels things in different way. It is a completely different context with the situations at City and Arsenal. A different concept and players. So I think it would be a bad thing to do from my side.

“He (Guardiola) is braver than any other manager and wants to take more risks and wants to play the way he wants and it does not matter what, he will maintain that line.”

With the match now postponed, the head-to-head between Arteta and Guardiola at the Etihad will have to wait a little longer.

Arsenal are due to be in action next on Saturday when they travel to the south coast to face Brighton at the Amex Stadium and the Seagulls say that game is still scheduled to go ahead as planned.