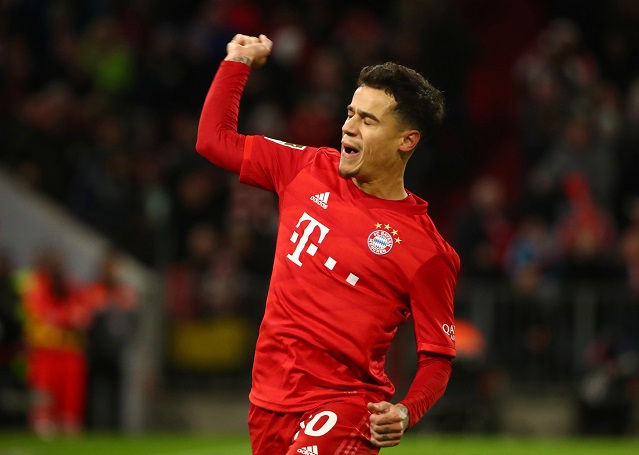 Arsenal are among the clubs said to be weighing up a move for Philippe Coutinho when the transfer window re-opens.

The Brazilian ace is currently on loan at German giants Bayern Munich but it looks as though he will not stay there on a permanent basis once the season-long deal comes to an end.

Coutinho has done well during his time at the Allianz Arena, but not well enough to convince Bayern to fork out the £100million that Barcelona will be looking for to make the deal permanent.

Barca are looking to cash in to fund transfer moves of their own with Neymar and Lautaro Martinez on the radar, and if Bayern will not meet the asking price, they will push the player towards the Premier League.

There is said to be no shortage of interest in England and Arsenal are not the only club to be mentioned in the Sunday tabloids.

Arch rivals Tottenham, along with Manchester United and Chelsea have also been mentioned, so the competition for his signature is likely to be fierce.

Philippe Coutinho has privately admitted to friends that he should never have left Liverpool.

His stay at Anfield has been described as “the happiest of his career” and a return to the Premier League is his main objective. [The Mirror] pic.twitter.com/Uz4wMRVhTM

It remains to be seen whether the Gunners would be willing to pay as much as £100million for Coutinho as it would mean having to break their transfer record to get him on board.

Boss Mikel Arteta is hoping for a squad revamp though and this kind of marquee signing would excite the fans and be a huge statement of intent.

Coutinho was at the top of his game when he opted to leave Liverpool and head to Barcelona, but things have not worked out since then.

However he has shown signs of his great former self during his time with Bayern and there is no shortage of clubs willing to take him on. Although Liverpool are not one of them.

Coutinho is also keen to return to the Premier League so there is a good chance that is where he will end up.