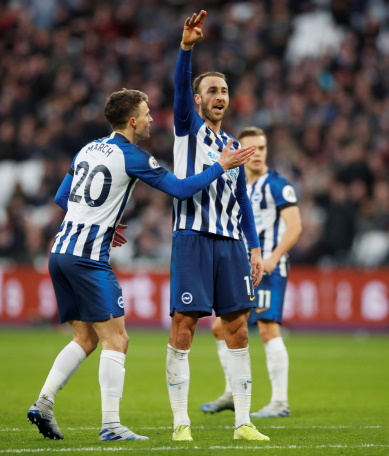 Brighton & Hove Albion striker Glenn Murray says the Premier League needs to do all they can to try and help struggling clubs in the Football League.

The Seagulls’ squad are now training from home since Monday as Brighton wait for further instructions from the Premier League and the government.

Football was suspended until April 4 earlier this month as Europe tries to tackle the coronavirus pandemic.

Murray says he has sympathy for his team-mates who are from overseas, but revealed morale is high in the squad as they try to stay united.

Brighton have only won one of their last 15 games in all competitions, but Murray says there are others in a worse situation.

The 36-year-old has played at every level in the Football League, and he is worried about smaller clubs being able to stay afloat.

The former Carlisle and Rochdale frontman has urged Premier League chiefs to try and help the rest of the Football League, so clubs will get the chance to complete the season when football resumes.

He told the Brighton official website: “This is my worry for this ongoing scenario, and we don’t know how long it could be. For clubs in Leagues One and Two, the National League and even some in the Championship it could be really difficult to get through.

“They live week to week, and gate receipts are a big income for them, and then there is the local infrastructure around stadiums – shops, pubs – who rely on matchday revenue. It could be really tough. Hopefully, the Premier League can help them financially so they can get up and running when football resumes.”

Brighton still have work to do to consolidate their place in the top flight, with Graham Potter’s men 15th in the table and only two points above the bottom three.