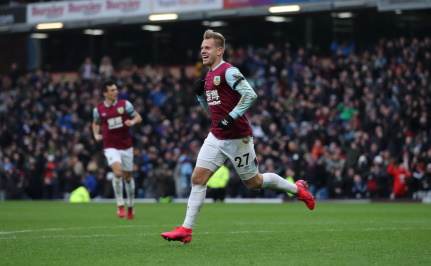 Matej Vydra's winner in Burnley’s 2-1 victory at Southampton has been voted the February 2020 goal of the month.

The Clarets striker controlled the ball down with his back to goal, took it past Saints defender Kyle Walker-Peters, evaded a few other Southampton players who tried to block his path before firing home a rising drive that flew into the top-left corner.

You can watch Vydra’s effort below, with his strike coming from one minute and 30 seconds into the video.

It was the Czech forward’s first goal of the season, and his first Premier League goal since September 2018, with Vydra going on to grab another goal in the following game as Burnley overcame Bournemouth 3-0 at Turf Moor.

“It was 511 days and I couldn’t believe it was so long,” the striker said after picking up his award, as reported on the official Premier League website.

“I think it will be a special goal for me and for my memory. I waited so long for the goal, now here we are and it’s goal of the month.”

The forward was named among the subs against Southampton, entering the action as a first-half substitute following an injury to Chris Wood.

The 27-year-old was then handed starting spots against the Cherries and Newcastle before appearing as a second-half replacement for Wood in the draw with Spurs in Burnley’s last outing before the Premier League was postponed.

Vydra had been linked with a move to Premier League rivals Aston Villa and Russian outfit CSKA Moscow during the January transfer window, but ended up remaining with Burnley and could well be set for more action in the remainder of the season – if the Premier League is able to resume.