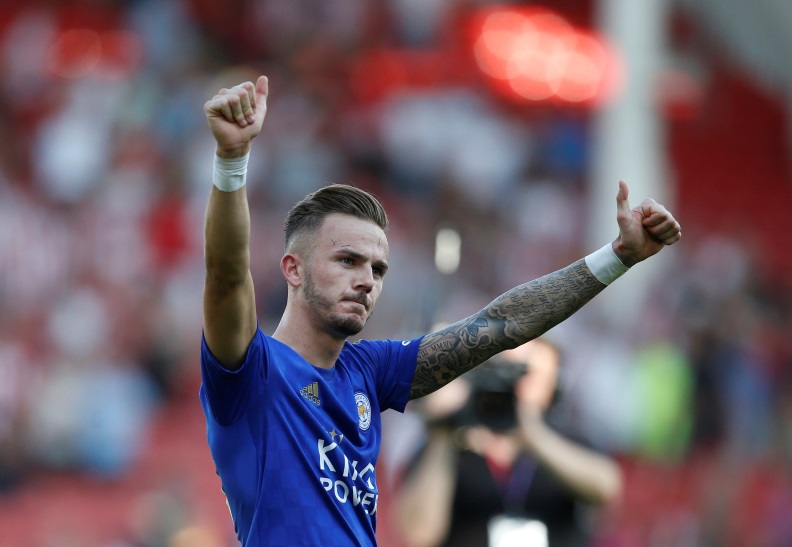 Brendan Rodgers is keeping his fingers crossed James Maddison could soon commit his future to Leicester amid ongoing contract talks.

The 23-year-old is enjoying yet another productive season with the Foxes, having caused a stir during his maiden campaign at King Power Stadium following his £22.5million switch from Norwich in 2018.

Having netted seven goals and contributed seven assists to the Leicester cause last term, Maddison has already bagged more goals this season, with nine to his name in all competitions.

James Maddison with a free-kick from the edge of the area?

His excellent performances for Leicester have put him very much in the frame for a call up to the England squad for this summer’s European Championship.

Given some of his headline-grabbing performances, it was inevitable other clubs would start taking a keen interest in the Coventry-born playmaker and Manchester United have been strongly linked with a move.

The Red Devils are understood to be willing to part with £45million and Jesse Lingard in their attempts to land Maddison, but Leicester have been steadfast in their insistence that he’s going nowhere.

The Foxes are understood to have opened talks with Maddison’s agent over a bumper new deal earlier in the year and had hoped to get the extension finalised during the mid-season break.

While they have missed that deadline, Rodgers remains confident Maddison will eventually put pen to paper and in the process curtail the potential for a summer of speculation regarding the midfielder’s future.

“Talks have been ongoing with the club and his representatives,” said Rodgers.

“I know the boy is very happy, he wants to be here and he sees this as the club he can develop at. I am hopeful it will be done.”

After a recent poor run for Maddison and Leicester, Rodgers is hopeful the England international can help his team turn the corner at Norwich on Friday night.

It will be the first time Maddison has gone back to Carrow Road since leaving to join the Foxes.

Rodgers admits it will be a noteworthy occasion for Maddison after he was given his chance with the Canaries by current boss Daniel Farke.

“He will always be thankful and grateful for what Norwich gave him. They gave him a great platform and he has come to here,” added Rodgers.