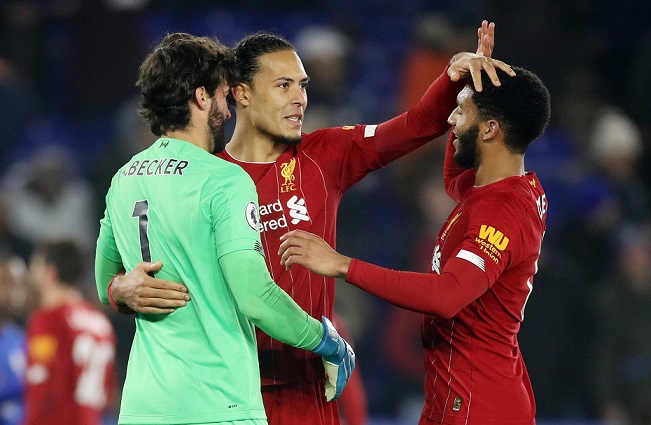 Joe Gomez says it is hard to comprehend just how much of an impact Virgil van Dijk has on the current Liverpool team.

Centre back Van Dijk scored the opening goal in Sunday’s 2-0 home triumph against Manchester United, which kept up Liverpool’s incredible unbeaten run in the Premier League this season after 22 games.

He nodded in a corner from fellow defender Trent Alexander-Arnold before Mo Salah added a second deep into injury time after breaking forward on a quick counter-attack.

It means Liverpool are now 16 points clear of Manchester City with a game in hand and appear to be strolling towards a maiden Premier League title.

Van Dijk has been a hugely influential figure for Liverpool this season and is widely regarded as the best central defender in the world due to his domineering performances.

He and Gomez have been the starting centre-backs in each of their last seven Premier League games, with the Reds keeping clean sheets in all of them.

Liverpool now prepare for a tricky looking assignment at Molineux on Thursday as they take on Nuno Espirito Santo’s in-form Wolves, although Klopp’s men will still head into the match as heavy favourites.

That is due in no small part to their miserly defence which has conceded just 14 goals all season.

Speaking about his Dutch team-mate, England international Gomez says it is hard to quantify just how important he is to their side.

“I don’t think it’s easy to measure what he does for us as a team. He’s such a dominant character, a dominant player,” Gomez told the club’s official website. “He’s a special player and we’re lucky to have him at the club – he’s my big brother! He’s a top player and a top person to be alongside.”

Van Dijk cost Liverpool a then world-record fee for a defender, with £75million paid to take him from Southampton in December 2017.

He became an instant hero after scoring the winner against Everton in Liverpool’s 1-0 FA Cup third-round win on his debut, and his performances led to him being nominated for the 2019 Ballon d’Or, although he narrowly missed out to Barcelona superstar Lionel Messi.