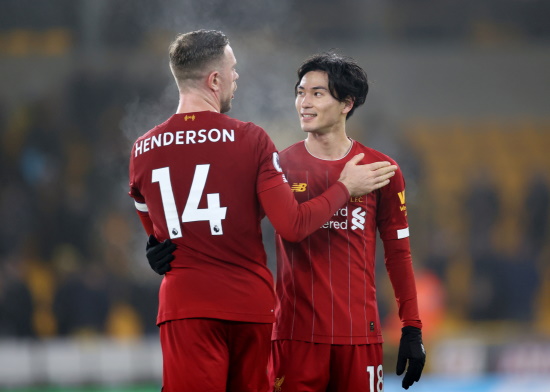 The Reds moved a step closer to the Premier League title despite a below-par performance from Klopp’s men as they travelled to Molineux.

Liverpool opened the scoring through Jordan Henderson, with the Reds skipper heading home Trent Alexander-Arnold’s corner. Both sides wasted chances before Sadio Mane went off injured with a hamstring issue in the first half, with Minamino stepping in.

Wolves grabbed an equaliser through Raul Jimenez, and the home side looked set for a draw until Roberto Firmino latched onto a Mohamed Salah pass to fire home in the 84th minute.

Liverpool have now won 22 of their 23 Premier League matches this season, and Klopp was impressed by Wolves’ approach.

He confirms they need to give Mane time before assessing the damage to his hamstring, but the German was quick to thank Minamino for his efforts in the Midlands.

The 25-year-old, who joined from Red Bull Salzburg in December, made his league debut on Thursday night and Klopp says he was ‘exceptional’.

He told reporters: “We had the situation that Sadio goes off, we played tonight slightly different to usually.

“Taki had now two or three weeks training with us, played different positions in training at least, played centrally in the FA Cup game, now played right and left-wing.

“So it was really difficult for Taki, he felt immediately the calf, at half-time he needed treatment – we hope it’s nothing and he could go through so it should be fine. That was, for the first Premier League game, exceptionally well and he is completely integrated in the team, and that’s really good.”