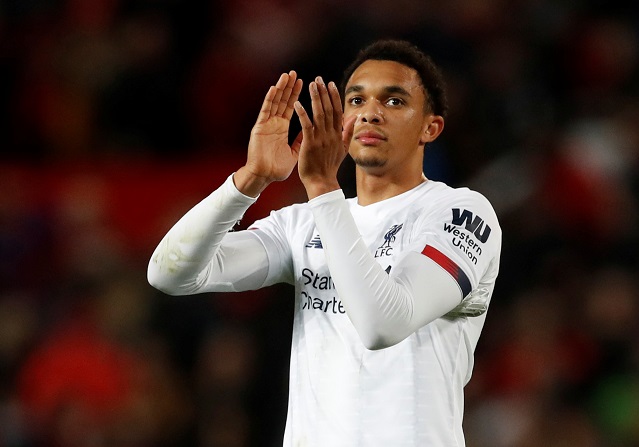 Trent Alexander-Arnold has admitted Liverpool are now on the verge of the title but warned Saturday's trip to Watford will be another tough hurdle to clear.

The Reds sit a huge 22 points clear of Manchester City in the Premier League and are now just four more wins from confirming the club’s first title since 1990.

In reality, the league has been won already but Liverpool’s players have been quick to stick the mantra of taking it one game at a time while pointing out there is work still to be done.

Most Premier League assists by a defender in a single season:

And he almost broke the record. 😅 pic.twitter.com/MmJFft6TcI

That remains the case but full-back Alexander-Arnold has now broken ranks slightly by declaring the long-awaited title win is “quite close”, although he’s focused on getting past what could be a tricky test against the relegation-threatened Hornets at Vicarage Road this weekend first.

“Obviously we’re quite close but they’re four very tough games,” he told the club’s website. “Anything can happen in the Premier League and we’ve learned that over the course of our time playing in it, it’s difficult for us.

“It will be difficult, we understand that but our main focus is on the next game and recovering for that because going to Watford is not an easy task and teams have learned that over the course of the season. Our mentality needs to be 100 per cent and we just need to focus on that and then after that we’ll focus on the next game.”

Following the trip to Watford, Alexander-Arnold could be among the Liverpool regulars given the night off by boss Jurgen Klopp when the Reds go to Chelsea in the FA Cup fifth round on Tuesday, before the title bid resumes with a home game against Bournemouth on March 7.