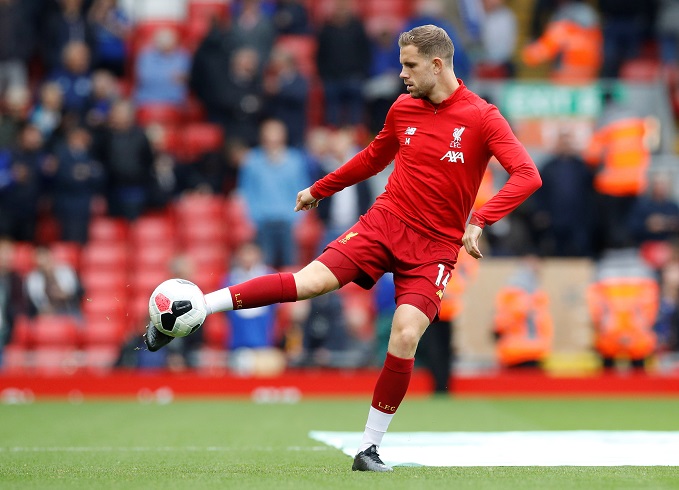 Liverpool remain without captain Jordan Henderson for the visit of strugglers Bournemouth in the early Premier League kick-off on Saturday.

The England international midfielder has missed the last three games for the champions-elect and they have struggled in his absence.

The Reds go into Saturday’s game following back-to-back defeats after their unbeaten run in the Premier League was ended by Watford before they were dumped out of the FA Cup by Chelsea.

Henderson has a hamstring issue and the game against the Cherries will come too soon for him, but he could make a return in the second leg of the last-16 Champions league tie against Atletico Madrid at Anfield on Wednesday, with Liverpool trailing 1-0 after defeat in the Spanish capital.

308 – Jordan Henderson played more Premier League games in this decade than any other player, one ahead of teammate James Milner (307). Leader. #Opta2010s pic.twitter.com/kqzZMRRHY9

Liverpool will also be without Switzerland international Xherdan Shaqiri due to a calf injury although Naby Keita could be in line for a return.

Keita has returned to training after missing the last two games with a hip problem.

Bournemouth will be without winger Harry Wilson as he is ineligible to face his parent club.

Cherries manager Eddie Howe has no fresh injury or suspension concerns although he still has a lengthy list of absentees.

Liverpool sit 22 points clear of second-placed Manchester City in the table and need four more wins from their final 10 games to claim a first title of the Premier League era.

Bournemouth managed a 2-2 draw with Chelsea in the last round of fixtures although they still dropped into the relegation zone as results elsewhere went against them.

The Cherries sit in 18th spot, level on 27 points with West Ham and Watford immediately above them.