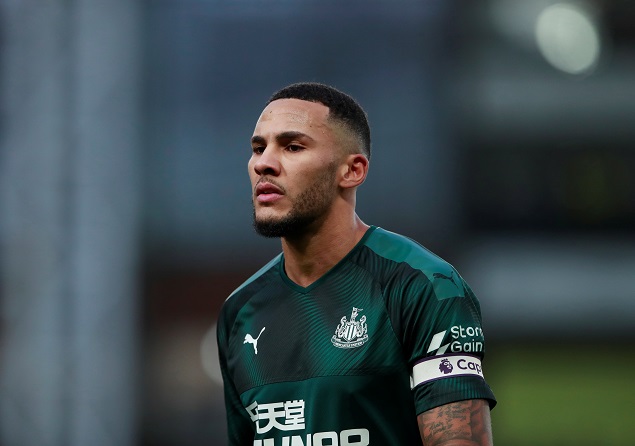 Jamaal Lascelles has indicated he wants to stay at Newcastle United for the rest of his career after reaching a century of games for the club.

Lascelles hit the 100-game landmark on Saturday in Newcastle’s 1-0 defeat at Crystal Palace.

The 26-year-old originally joined Newcastle in 2014 after starting his career at Nottingham Forest, returning to the City Ground on loan for the 2014-15 season before finally getting his chance with the Magpies.

The centre-half’s game has gone from strength-to-strength at St James’ Park and was named club captain in 2016 upon Newcastle’s relegation to the Championship, becoming a mainstay of the north-east outfit’s defence, a position he has held ever since.

Lascelles, speaking after his 100th Newcastle outing, says he is targeting playing “200 or 300” times for the club and is keen to replicate the loyalty of players in the past.

“From playing first-team football the players who have caught my eye are the ones who stay at a club the whole time,” he said.

“I think that’s a bit more special than a player who skips around teams – a season here and there, whereas a player who sticks at one club and has a relationship with the fans, and the city, and Newcastle as a whole, I’d much prefer to do it that way.”

🗣 “It’s a huge achievement for me to play 100 times in the Premier League for Newcastle so I’m proud.” #NUFC

Formerly an England Under-21 international, Lascelles has become a fans’ favourite since making the switch from Forest.

In October 2018, he signed a new long-term contract at the club, committing himself to the summer of 2024 and does not appear likely to make a move any time soon.

This season has been a frustrating one for the Derby-born defender, having picked up a knee injury in November.

It ruled him out for two months before he returned to action in Newcastle’s 4-1 FA Cup replay win against Rochdale.

Lascelles has started each of Newcastle’s last seven games since across all competitions as Newcastle lie 14th in the Premier League table with 31 points.

Their next encounter is a home game against Sean Dyche’s in-form Burnley on Saturday as Steve Bruce’s side continue their quest for survival.