Wilder says “refreshing” McBurnie must be more careful in future 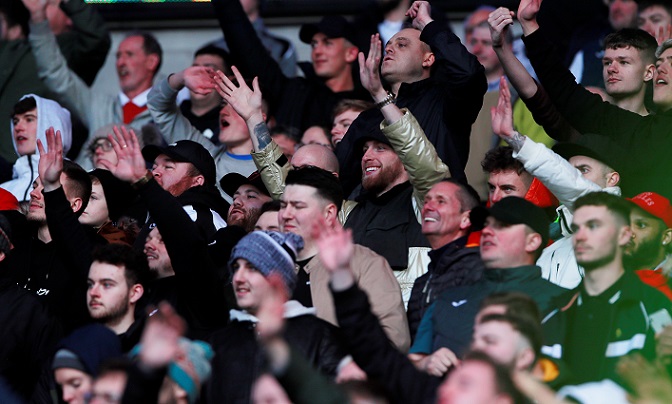 Sheffield United manager Chris Wilder says he has spoken to Oli McBurnie after he was pictured in the Swansea crowd at Cardiff on Sunday.

The former Swans forward attended the match as a fan and was spotted by eagle-eyed cameras during the televised South Wales derby.

He has been spoken to by the FA after being deemed to have made an obscene gesture during the goalless draw.

McBurnie had Sunday off after he scored the winning goal in Friday night’s 1-0 victory against West Ham United at Bramall Lane.

The FA warned him about his future conduct but decided not to charge the 23-year-old, who moved to South Yorkshire in the summer for a fee of around £20million in the summer.

And, Wilder has followed up on that warning from the FA by speaking to McBurnie himself.

The Blades boss said it was great to see his striker go to the game as a supporter but says he must be more careful in the future not to attract so much attention.

“We’ve rightly recieved a letter from the FA but I can relate, there was a time when I was player/manager that I’d rush back to the Lane.

I have no problem with Oli going back to watch them, he has a big connection there.

I think it’s quite refreshing to be honest” CW on Oli. pic.twitter.com/SglP9U7hlA

“He’s a footballer and with social media and cameras everywhere you can’t get involved,” he told reporters. “He must represent himself, more than anything, a touch better and he understands that.”

“I think it’s refreshing that he wants to go and watch games of football. We just had a word with him on the other bit [gesture]. As far as I’m concerned we move on now.”

McBurnie has enjoyed a decent start to his career at Bramall Lane having scored four goals no 20 appearances, two of the proving to be matchwinners.

His form at Swansea last term, where he scored 22 goals in 42 Championship games, prompted Wilder to make him their club-record signing.

Meanwhile, the 52-year-old also revealed that John Lundtsram will stay at the club beyond this season.

The midfielder’s contract is up in the summer, but United have a clause to extend it by a further year which will be exercised.

The ex-Everton trainee has been a mainstay in United’s team this campaign, scoring three goals in 22 appearances.