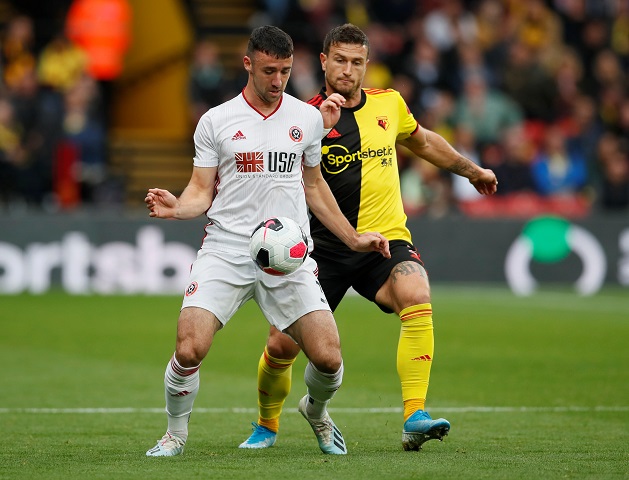 Sheffield United boss Chris Wilder has spoken of his confidence in Ben Osborn, as he lines the 25-year-old up to replace the injured Enda Stevens.

Republic of Ireland international Stevens was forced off at the weekend during the 1-0 win over Norwich City after picking up a calf injury, with his manager alluding to an absence of two to three weeks in his Thursday press conference.

“It’s disappointing from Enda’s point of view. But these things you have to prepare for and Ben (Osborn) has slotted in really well,” the former Northampton and Halifax boss reflected ahead of Saturday afternoon’s trip to Newcastle.

As well as Osborn – who has featured seven times this season since joining from Nottingham Forest last July – Wilder can call upon Jack Robinson, a centre-half by trade who can cover on the flanks. The 26-year-old also arrived from the City Ground, slotting into the United ranks after an 18-game stand for Forest ahead of his January transfer.

Dublin-born Stevens’ loss is a major setback for the Blades, with the left-back an ever-present in their first season back in the top-flight.

“Enda’s a big loss, to not have him for these games and the Ireland games is going to be tough.”

“He’s been in brilliant form this season”

Starting out at UCD in his hometown, a young Stevens spent time at St Patricks and Shamrock Rovers before a move to Aston Villa in 2012. His first-team exploits were limited to just seven league outings, with loan spells at Notts County, Northampton and two stints at Doncaster Rovers filling much of his spell with the Midlands club.

Portsmouth acquired the defender’s services in 2015 and the Irishman would flourish during two years at Fratton Park, earning himself a place in the 2016-17 League Two Team of the Season as Pompey gained promotion to the third tier.

A move north to South Yorkshire soon followed and 122 appearances later, Stevens is a key part of the red-and-white unit that continues to power its way towards European qualification. Wilder’s side sit seventh, just five points behind fourth-placed Chelsea with a game in hand to boot.