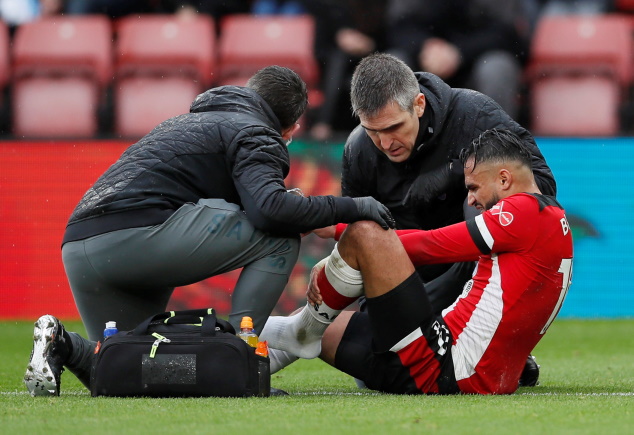 Southampton have been hit by a double injury blow with Nathan Redmond and Sofiane Boufal both facing spells on the sidelines.

Saints had an afternoon to forget at St Mary’s on Saturday afternoon as they slipped to a 2-1 defeat against Burnley, but the news come from the treatment room wasn’t great either.

Southampton boss Ralph Hasenhuttl had more bad news to report at full-time with Redmond set for a spell on the sidelines with a hamstring injury sustained in training on Thursday.

Not only that, but Boufal could join him on the treatment table too, after he was forced off in the first half against the Clarets with an with an ankle issue.

Hasenhuttl says they do not know the full extent of the damage to Redmond’s hamstring injury, but best case scenario it looks like a month out, worst, two months out.

The boss delivers an honest assessment on a frustrating afternoon for #SaintsFC against #BurnleyFC:

The news could not come at a much worse time as Saints bid to pull away from danger and with the transfer window closed they now have to rely on what they have.

“Hopefully not too bad (for Boufal). I don’t know at the moment with his ankle,” the Saints boss added after the game.

“We have two number 10s left and the two 10s they have now the chance to play and must show up. Everyone is always demanding to play and we have now two changes in the team and we must find a way back to the way we played before this game.”

Earlier in the game, played in terrible conditions at St Mary’s, Ashley Westwood’s second-minute opener, directly from a corner, had given the Clarets the lead before it was cancelled out by ex-Burnley forward Danny Ings.

It was left to Burnley substitute Matej Vydra to wrap up the win for Sean Dyche’s men with a sublime chest control and finish.