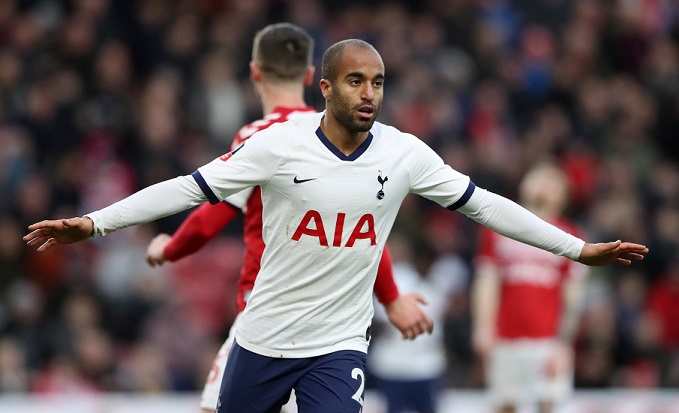 Lucas Moura hopes he can add more goals to his game in the absence of Spurs striker Harry Kane.

Kane has a hamstring injury and faces a stint on the sidelines following an operation. It remains to be seen when the England international will be able to make a return to action, with some reports claiming he could be back in mid-April and others indicating he faces a battle to feature again this season.

Tottenham have been tipped to bring in a new forward in the January transfer window and a number of strikers have been mentioned as potential targets. Fernando Llorente, who left Spurs when his contract expired at the end of last season, has been linked with a return, while Paris Saint-Germain’s Edinson Cavani, Lyon star Moussa Dembele and Leicester outcast Islam Slimani, who is currently on loan at Monaco, have also been suggested as possible signings.

Lucas admits Spurs are struggling to break teams down without Kane after Saturday’s goalless draw at Watford, but the Brazilian feels they have the quality to cope without their star striker and hopes he can help fill the void.

“For sure, I want to score, I work to score and I try to score every time, but for me the most important thing is to win games” he said, as reported by the Evening Standard. “We know that we don’t have a player like Harry Kane, he’s the only real striker in the squad.

“When I play in this position, I try to do my best and try to give the team my characteristics. I think everyone is trying to score and to win games.”

Spurs are back in action on Wednesday evening when they entertain rock-bottom Norwich City in the Premier League.