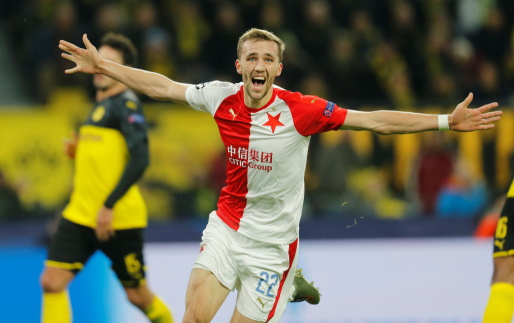 The Hammers have announced the signing of the 24-year-old, who will join on an initial loan deal with the option to make the move permanent in the summer if it goes well.

The midfielder has been a mainstay of the Slavia side in recent years, helping them win the Czech title twice, and he’s also been an important player on the international stage, winning 25 caps for the Cech Republic.

We are delighted to confirm the arrival of Czech Republic international Tomas Soucek on an initial loan deal, with an option to make the transfer permanent in the summer.#WelcomeSoucek

Moyes says Soucek has all the attributes the Hammers look for when trying to sign new players and he expects him to make an impact at the London Stadium when he settles into his new surroundings.

Moyes said on the club’s website: “We are delighted to welcome Tomas to West Ham United. I think that he gives us a lot of different qualities, but most importantly he fits the profile of the player we want to bring to the Club. He is young and hungry but with an established pedigree and proven talent.

“He was captain of Slavia Prague, he’s played as a defensive midfielder but he’s scored a lot of goals as an attacking midfielder as well. At the moment he ticks a lot of boxes. We need to give him the opportunity and time to settle in but we are confident he will prove to be a strong addition to the squad.”

Soucek has hit 40 goals for Slavia in total, including eight this season, while he has also weighed in with three assists in 17 league games this term.

Soucek has not joined in time to be involved in Wednesday’s home clash with Premier League leaders Liverpool but he could make his debut in Saturday’s relegation six-pointer against Brighton at the London Stadium.