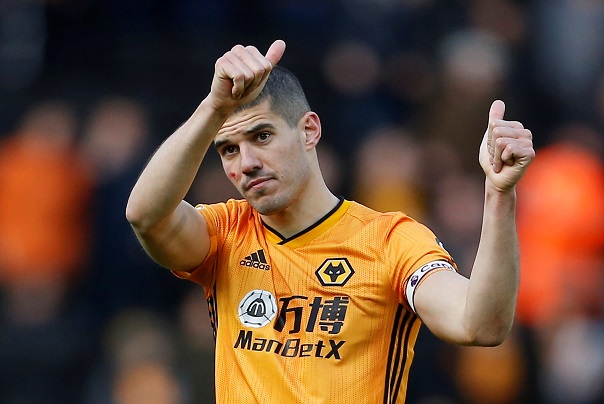 Conor Coady has been a constant presence in Wolves’ sharp rise to European contention and is deserving of international recognition.

In Nuno Espirito Santo’s first game as Wolves manager against Middlesbrough in August 2017, plenty of new names were in the line up as their summer overhaul looked to take shape

Many of them have proven to be magnificent captures – Ruben Neves, for example, has shone since making the £16million move from Porto and realistically should never have been playing Championship football to start with. Meanwhile, Willy Boly’s recent absence from the first team has shown how important a cog he is to the team.

Others were not quite as successful – Leo Bonatini’s goalscoring form dipped to the point where Nuno decided he wasn’t worthy of consideration in the Premier League, while Roderick Miranda’s spell ended up being plagued by injuries – he is still contracted at the club but on loan at Famalicao in his homeland.

The summer of 2017 signalled seismic movements within the club. Chinese investment group Fosun were entering their second year as the club’s owners after failing to guide them to promotion in their debut campaign.

Money was pumped into the team, a partnership with Portuguese “super-agent” Jorge Mendes was formed, and a manager with big pedigree was appointed.

Despite several changes occurring to the playing staff, one man remained put. Conor Coady was installed as skipper but had to reinvent himself, switching from a standard holding midfielder to a lynchpin of Wolves’ back three.

That has proved to be an inspired decision from Wolves and they are still reaping the benefits now.

The ex-Liverpool trainee has seen an array of changes around him in terms of playing staff but is still essentially the player Wolves build their team around.

His adaptability has proven invaluable – he has managed to combine the passing ability of a midfielder with the nous of a defender, and the 27-year-old is primed for a long-term future in the Black Country.

With the European Championships only four months away, it is perhaps not seen as the best time to be giving players their international bows, but Coady deserves his chance.

It is baffling to see his continual international exclusion particularly when others who have not played as well e.g. Tyrone Mings are given an opportunity.

Doubters and naysayers might point to the fact that Coady has only ever played in a back three and Southgate, for now, prefers a central pair.

However, as proven already, he certainly has the capacity to adapt to different situations.

And, his leadership skills cannot be overlooked. Coady is always the spokesperson for the dressing room and is clearly a player who the rest of the squad look up to.

Even his recent appearance as a pundit on Sky Sports’ Monday Night Football showcased a calm and assured demeanour – rather than dipping into the endless river of clichés and monosyllabic murmurs, Coady looked natural and unflappable in front of the cameras.

Centre-back is still regarded as a problem position for England. John Stones has been out of the Manchester City team, Harry Maguire’s form has been patchy at Manchester United, while Mings, Fikayo Tomori and Michael Keane have all yet to convince.

Based on all the evidence available, a call-up for Coady should surely be a formality.