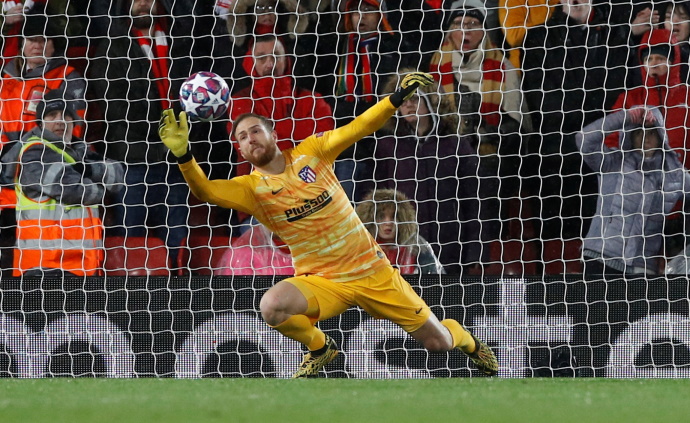 Atletico Madrid manager Diego Simeone paid tribute to his goalkeeper Jan Oblak, comparing him to Lionel Messi for the way he wins games.

Atletico are through to the quarter-finals of the Champions League following a dramatic 3-2 extra-time win over Liverpool at Anfield on Wednesday night, and Oblak was the star of the show.

Without doubt goals win games, but so does keeping them out and Oblak was at his best to keep a rampant Liverpool at bay in the second half.

The tie was level at 1-1 on aggregate after Georginio Wijnaldum had put Liverpool 1-0 up on the night and Jurgen Klopp’s men piled forward in the second half looking for the winner to take them through.

However Oblak kept them out until extra time when Roberto Firmino did put them 2-0 up on the night, but there was still time for Atletic to get back into it.

A night we will never forget. Thank you, Atleti Family!#AnotherWayOfLiving pic.twitter.com/jtEdDMh5eJ

And that is just what they did as a brace from Marcos Llorente and a further strike from Alvaro Morata did the job and booked their spot in the last eight of the competition.

On a night when Liverpool goalkeeper Adrian dropped a huge clanger to allow Llorente to score his first, a crucial away goal, Simeone was delighted to have Oblak at the top of his game.

“He stopped every situation he had today but we also made it hard for their strikers to shoot,” he said. “He saves games for us. Messi wins games for you up front and in goal people can win games for you as well. Oblak does that.

“Our fans will remember this and his performance for a long time.”