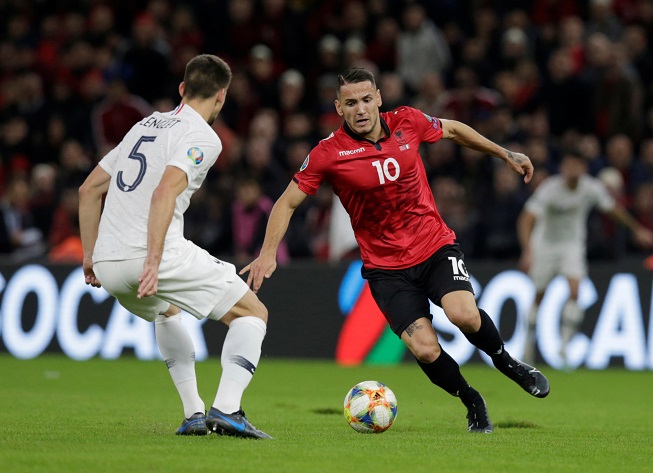 Barcelona boss Quique Setien is confident Rey Manaj can cope with the pressure after being drafted into the senior side for this weekend.

Barcelona only signed Manaj from Albacete last month in a deal worth around 3million euros and he was immediately sent to the B side, who are currently sitting fourth in Segunda Division B.

The 22-year-old striker, who put pen-to-paper on a three-year contract, made his debut in a 2-0 home win against Ejea before opening his account in the 2-1 win over Prat on February 2.

Manaj has now been thrust into the senior squad for this weekend’s visit of Getafe as the Catalans deal with an injury crisis in the attacking department, having recently confirmed Ousmane Dembele will be out for the season.

The France international has now joined Luis Suarez on the injured list and the Spanish champions are currently in talks with the Spanish football authorities as to whether they will be allowed to sign a contracted player this month in an emergency deal.

Reports have linked Barcelona with a number of attacking targets, including Real Sociedad’s Willian Jose and Real Betis striker Loren Moron, but they have failed in their transfer efforts to date.

Setien has been speaking about Manaj ahead of this weekend’s clash and the manager is adamant the Albanian will be able to produce the goods if called upon.

“He is a player who can help us,” he was quoted as saying.

“It takes a short time and has a period of adaptation, but we are incorporating different players into training every day and they will enter the first team.”