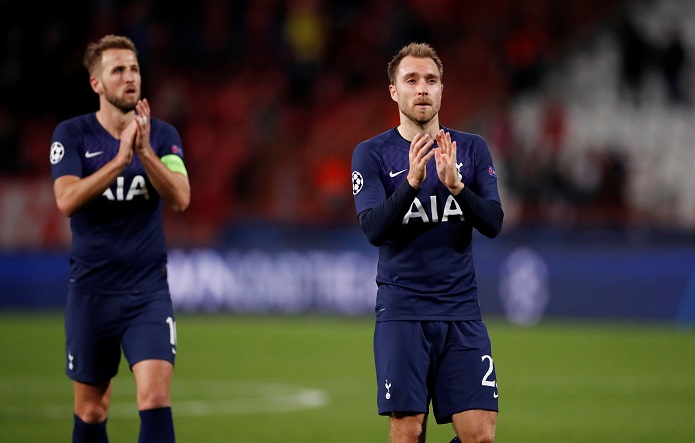 Inter Milan president Giuseppe Marotta is confident of signing Spurs' Christian Eriksen and there could be more deals in the pipeline at the club next week.

Sky Sport Italia report that the Nerazzurri have reached an agreement with Tottenham over Eriksen for 20m euros, including bonuses.

The Dane, whose contract expires in the summer, has been a prime target for Inter throughout this month although the Serie A club have struggled to agree a fee with Spurs.

Varying reports have claimed the final figure could be anything between £15m and £25m, although it now seems as though the maximum Spurs will be paid will be just under £18m.

Eriksen, who was not named in the starting XI or the bench in the FA Cup fourth-round tie at Southampton on Saturday, should earn 8million euros per season.

He is expected to jet into Milan on Monday to complete the formalities of the deal with an element of confirmation coming from Marotta ahead of Inter’s 1-1 draw with Cagliari on Sunday.

The Inter CEO told DAZN: “You all know that we are negotiating with Tottenham, I am optimistic and I hope everything can be concluded quickly because the market closes on Friday and we hope to conclude the negotiation in the next few days.”

Matías Vecino will leave Inter for Everton as soon as Inter complete the signing of Olivier Giroud from Chelsea. Vecino will join Everton for €20m. (Source: Gazzetta dello Sport)#EFC pic.twitter.com/9oM45HIjwT

Once all the loose ends of the Eriksen deal are tied up, Inter will then push ahead with other transfer business as they continue to pursue Chelsea striker Olivier Giroud and field calls about midfielder Matias Vecino – an Everton target.

“A good player arrives, then we will talk about the final dynamics of this market internally,” added Marotta, who has already added two other ex-Premier League players this month – Ashley Young and Victor Moses.

Ex-Manchester United man Young contributed an assist on his debut, setting up Lautaro Martinez for Inter’s opener on Sunday while Moses was an unused substitute for coach Antonio Conte.

“Certainly important professionals have arrived, you have to give them time to settle down and Conte will work on this,” concluded Marotta.