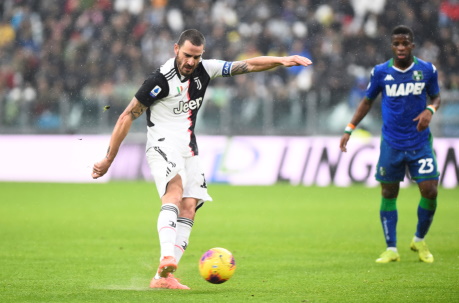 Juventus defender Leonardo Bonucci says he and his team-mates are in a good place and are excited by the prospect of facing Lyon.

The Serie A champions arrived in Lyon on Tuesday for the first leg of their Champions League last-16 tie on Wednesday night.

After coming through a dip of form, Juventus are back to winning ways after victories over Brescia and SPAL in their last two Serie A outings, keeping them a point clear of Lazio at the top of the standings.

With Bonucci enjoying training under manager Maurizio Sarri, the veteran defender says the team and himself are feeling good about the trip to Lyon as they prepare to resume their European campaign and can’t wait for kick-off at Groupama Stadium.

“It is the right place to demonstrate that, when the right moment arrives, we are here,” Bonucci told reporters. “We are ready for this part of the season with great hunger to get to the end of each competition.

“I am very positive. The trainings are helping us to improve and it is becoming easier to mirror what we do there on the field. Even today’s training left me eager for tomorrow.”

🗞 The full words of both ahead of #OLJuve 👇

Fellow veteran defender Giorgio Chiellini has recovered from a long-term knee injury and will be hoping for a starting role against Les Gones.

Meanwhile, midfielder Miralem Pjanic is struggling due to injury so Rodrigo Bentancur could be handed a start in the middle of the park.

Also in midfield, Aaron Ramsey faces a battle with Adrien Rabiot for a place in the starting line-up, with it currently uncertain which one will get the nod from head coach Sarri.